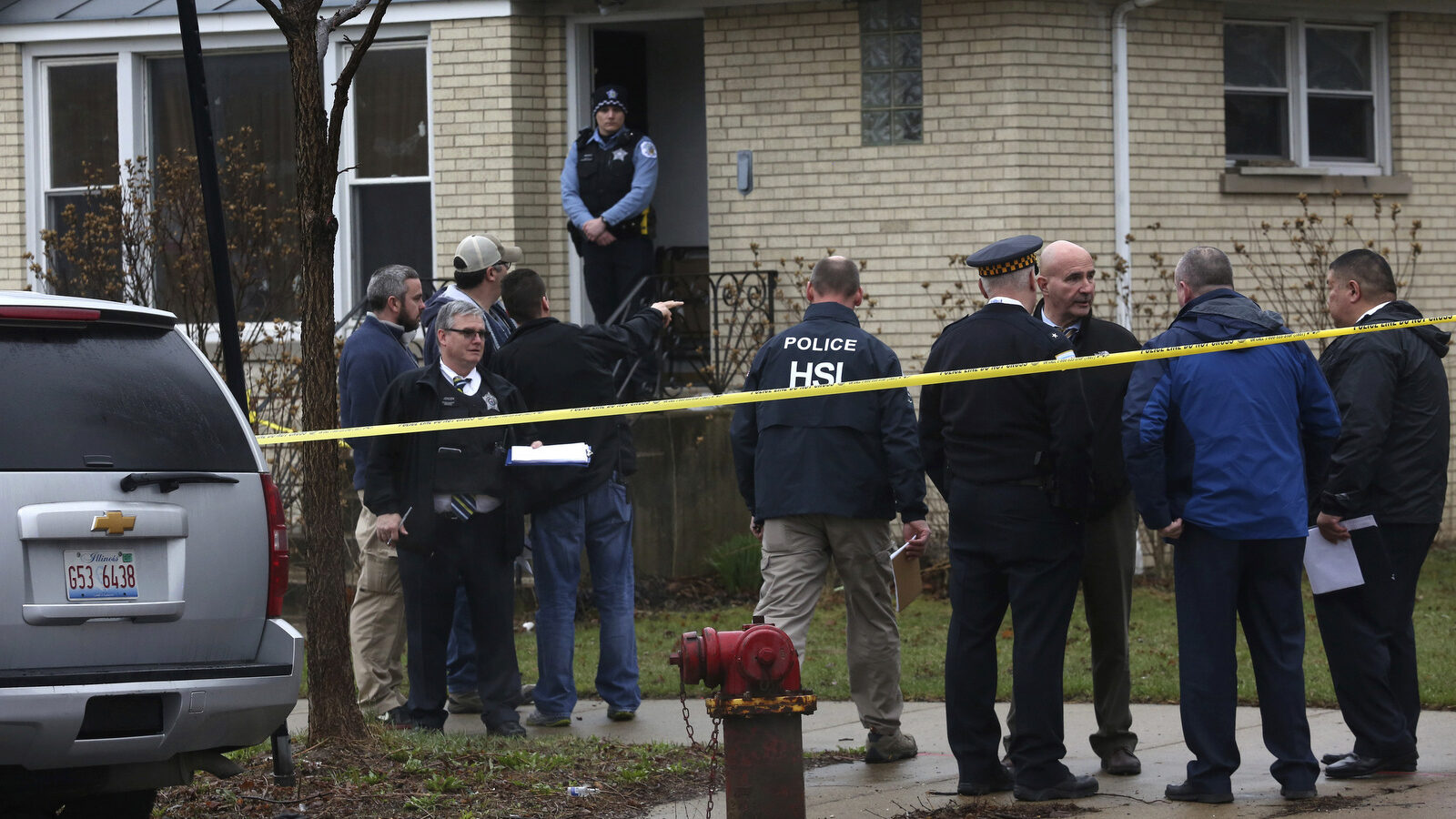 Chicago activists and residents called for more transparency Tuesday as officials with U.S. Immigration and Customs Enforcement investigate an agent-involved shooting that left a man wounded and raised questions about the use of force.

Law enforcement agents investigate the scene of a shooting in Chicago on Monday, March 27, 2017. U.S. Immigration and Customs Enforcement said a special agent was attempting to arrest someone Monday morning when a second person pointed a weapon at agents. ICE officials said the special agent fired his weapon, wounding the second person. (Nancy Stone/Chicago Tribune)

Belmont Cragin, IL — Answers must be demanded over the inexplicable shooting of a wholly innocent man in the Chicago area home he’s owned for decades, as ICE agents — ostensibly searching for the man’s adult son — opened fire on the homeowner despite children just months old sleeping nearby.

And no one knows why U.S. Immigration and Customs Enforcement raided the house in the first place — they’re citizens.

ICE claims the family man had a gun. His daughter begs to differ.

“It’s a lie when they say he was holding a gun. He doesn’t even own a gun,” railed Carmen Torres, who was asleep in the basement with her one-year-old daughter and husband when the immigration police blasted through the door. “They shot my dad. They shot him, and I don’t know why.”

Official explanations beyond rudimentary factual accounts of the shooting have not been forthcoming — even as the man who did nothing illegal recovers in the hospital.

In fact, Torres, like the rest of his family — including the son allegedly targeted by U.S. Immigration and Customs Enforcement agents — are not in the country illegally.

They’re documented American citizens — and have lived in the same location in Chicago’s Belmont Cragin neighborhood for over 30 years.

“They didn’t say anything,” Carmen Torres asserted for the media, adding that, besides her daughter, a 5-month-old and 9-year-old were in the home during the ICE invasion. “They just came in and pointed pistols in our faces and dragged us out. We didn’t even have time to dress or grab milk for the baby.”

But the discrepancies between the nascent official narrative and eyewitness testimony from family and friends in the home at the time of the botched raid only grow stranger from there.

“A spokesman for ICE said that ICE Homeland Security Investigations agents were attempting to arrest a person when a second person pointed a weapon toward the agents and as a result, an agent fired his gun and wounded the man,” local ABC7 summarized.

According to dna.info, 56-year-old Torres “was hit in his left arm and taken to Stroger Hospital, where he was in serious condition, police said. ICE said the wounded man was not the person they came to arrest.”

Whether or not Torres brandished a gun — or if the father even owned a firearm — will now ostensibly be examined in investigations already launched by ICE’s Office of Professional Responsibility, as well as the Chicago Police Department.

However, one factor central to this single, controvertible example of an ICE immigration raid gone violently awry, and portentous of any to follow, is Chicago’s status as a sanctuary city — a designation prohibiting local law enforcement from cooperating with federal authorities to round up those believed to be in the United States without documentation deemed mandatory by the State.

Despite that and other protections sanctuary cities provide immigrant families, ICE maintains authority to conduct sweeps for undocumented people — whether or not the location takes issue with its presence — leaving little recourse, even in the supposedly safest spots in the nation for those scared of being wrongly deported.

To wit, Chicago Police responded to the shooting, but a spokesperson for the department said officers had not participated in the raid.

“ICE’s guns blazing raid on a northwest side home filled with sleeping kids is exactly why the City of Chicago should refuse to collaborate with ICE. ICE routinely violates the American people’s constitutional rights,” inveighed Alderman Carlos Ramirez-Rosa in a statement cited by ABC7. “This guns blazing ICE raid deepens my resolve to organize my community so we can keep each other safe from the threat posed by ICE.”

“We’re going to have to talk to CPD to find out if this was a coordinated effort, because if it was in any way, that raises concerns about us as a sanctuary city,” explained Alderman Gilbert Villegas, who represents the 36th Ward, where police terrorized and fired upon this family of innocent Americans. “Is this our future in Chicago with Donald Trump as president?”

While the ICE agent may have been justified shooting Torres if the as-yet debatable detail of his raising a gun first proves true, Villegas expressed qualms about the overall legitimacy of the raid, given incongruent accounts of what occurred.

“The community’s got to be nervous about this, and rightfully so, because you have a right to be in your own home without being intimidated,” Villegas observed. “I’m conflicted because I haven’t got all the details [of the incident] yet, but from the way this has started to play out, it looks like an overstep by an overzealous ICE agent who’s just trying to follow Trump’s orders.”

Officious immigration agents might indeed be the perversely authoritarian outgrowth of President Trump’s disputatious and exhaustive effort to round up anyone lacking appropriate permissions to be in the country.

One skittish ICE agent proved to be a nightmare for Felix Torres — but the entire agency received a law-and-order pat on the back from the new administration.

Last month, as immigration raids gained momentum, the Department of Homeland Security issued two memos seeming to give teeth to contentious mass deportations and the raids preceding them — enjoining ICE agents to, in twisted essence, take back their power.

“D.H.S. outlined a radical shift in U.S. immigration policies, constituting a wholesale rejection of the approach under President Barack Obama. Among other things, the new Trump policy—which the president described as a ‘military operation’—calls for the hire of 10,000 new Immigration and Customs Enforcement agents and broadens the definition of ‘removable alien.’ It allows Border Patrol agents to target undocumented immigrants convicted of any criminal offense—no matter how minor. A New York Times report, based on interviews with 17 I.C.E. agents and officials, suggests that this has emboldened and empowered federal immigration agents across the U.S.”

Nationalists subscribing to Trump’s particular brand of, get out of America — you don’t belong here, consistently praise the same immigration raids striking terror into the hearts of citizens, legal residents, and undocumented workers, as necessary to cleanse the nation of an ostensive unproductive, criminal element.

However, everything about the shooting of Felix Torres instead intimates a phenomenal abuse of concentrated power by federal agents working outside the bounds of local authority.

And that Torres’ family are U.S.citizens residing inside the boundaries of a sanctuary city could evince a transformation of Immigration and Customs into America’s first — if semantically unofficial — experiment with a national police force.

Rumored to be in the planning stages for years, a federal police force remains the substance of conjecture and debate; but, for ICE to assume the chimerical powers of local law enforcement and that of a federal agency belies a categorical blurring of lines — the same lines meant to protect individuals and honor differences in governance by state.

Empowering the already powerful ICE agents could prove to be an horrific error in judgment.

In fact, although ICE refused multiple media requests to clarify why agents descended on the home, or to confirm the subject of the raid on Torres’ home, were refused — but an unnamed and unverified source toldABC7 there are allegedly weapons charges outstanding against the adult son.

That absolutely should not alleviate concerns or excuse the raid and shooting, even marginally. Once again, this is a family of American citizens living in a sanctuary city — as a weapons charge falls indisputably in the jurisdiction of local police.

“Why was, basically, ICE here? What was the reason ICE was here?” queried Rosa Reyes of Communities United — asking the one question most in need of an answer.

“If it has to do with a police matter, it has to be the actual police from Belmont-Cragin taking care of the matter, not ICE.”

No matter where you fall on the spectrum of opinion concerning immigration, the Wall, border patrol, or anything pertaining to Trump’s terrifying attempt to clean house, that arms of the government have ceased effectively communicating with each other — must sound a chorus of alarm bells.

Villegas and other aldermen attempted to gather information from ICE on the non-fatal shooting of Torres, but were either rebuffed or met with stony silence. An announcement from ICE is slated for release later today.

“They’re treating our office like we’re nobody,” Villegas opined, “so that tells me that I have to talk to the congressmen and the senators to get some answers on this issue, but this is very alarming.”