A Shiite rebel, known as a Houthi, holds up a fragment next to the rubble of a houses destroyed by a Saudi-led airstrike in Sanaa, Yemen, Friday, July 3, 2015. (AP Photo)

Airstrikes began in March, when the Houthi government took power in the country from elected President Abed Rabbo Mansour Hadi, an ally of Saudi Arabia and its Western allies in the region. Tuesday night brought more bombs to the country and emphasized the indiscriminate nature of the destruction taking place, according to BBC News. When the smoke cleared, the Saudi-led coalition found it had accidentally struck a base full of soldiers loyal to the former president, killing 70 soldiers and wounding 300 more. 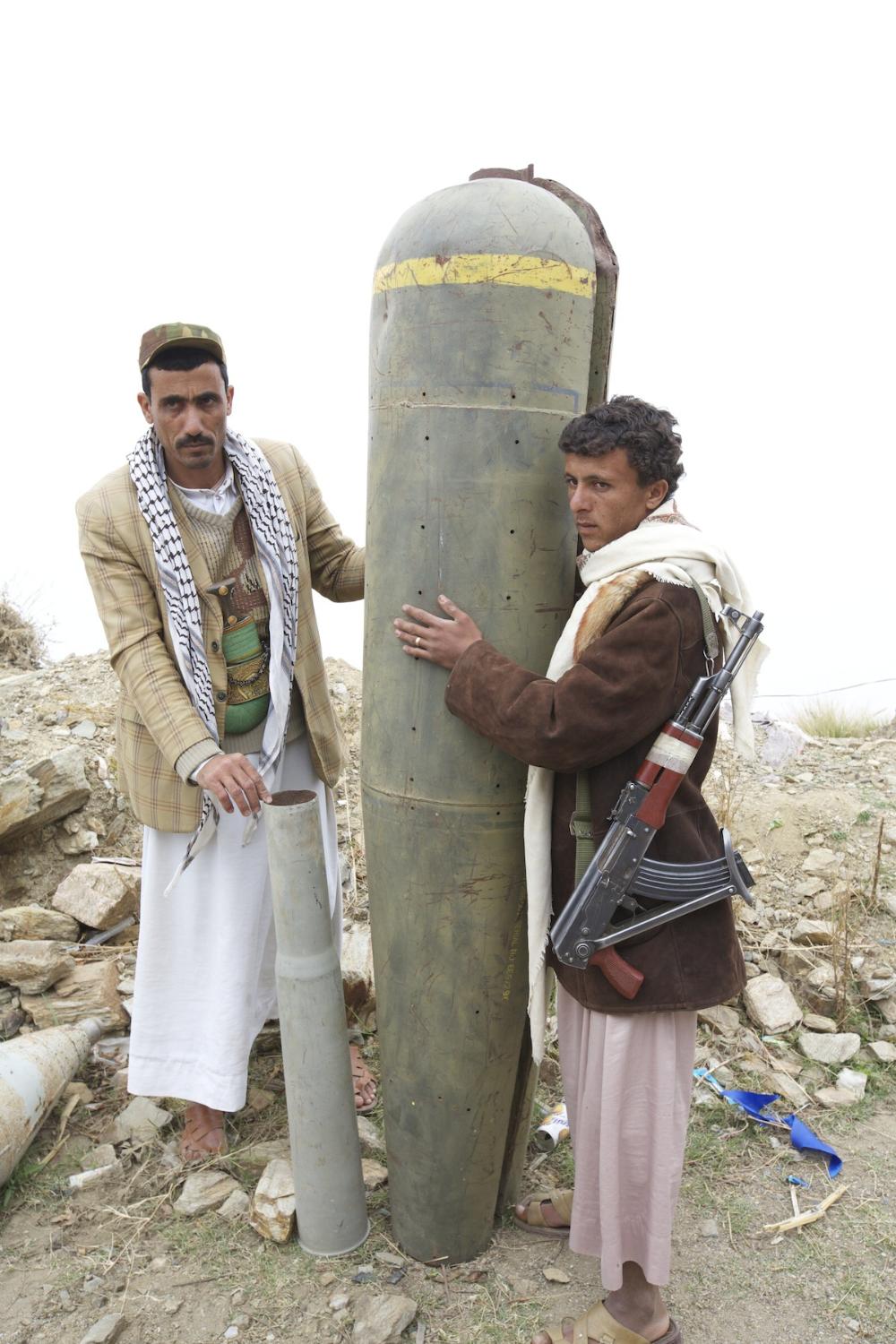 At the beginning of the bombing campaign, Saudi officials claimed they wanted to “help” the Yemeni people, who had just seen their elected president overthrown. Suraya Dadoo, a researcher working with the Johannesburg-based advocacy group Media Review Network, claims the opposite is true. Writing for The Star on Thursday, Dadoo reported:

“In order to ‘help’ the Yemeni people, Saudi fighter jets, along with those from Egypt, Morocco, Jordan, Sudan, the United Arab Emirates, Kuwait, Qatar and Bahrain – armed with American and British munitions – have killed over 3 000 people and injured almost 15 000 more.

The city of Saada has been flattened.

The conflict has killed 3,000 people, mostly civilians, since March. According to a United Nations report published this week, more than 1,500 civilians have died, while an additional 3,600 were injured and over a million displaced. With the bombs striking civilian infrastructure as readily as military targets, Jens Laerke, spokesperson for the U.N. Office for the Coordination of Humanitarian Affairs, called it a “massive” human rights crisis that only shows signs of growing worse.

“Over the past few weeks, OHCHR documented rights violations and abuses and violations of international humanitarian law by all parties to the conflict, including violations of the right to life, abduction, ill-treatment and attacks against humanitarian workers, journalists and media organizations,” the U.N. report states. Officials have asked for $1.6 billion to deal with the crisis, but relief efforts have been only partially funded by world governments.

Watch video of US made cluster bombs being deployed by the Saudi Air Force on Yemen:

Ansar Rashed, writing for UNICEF, warned that Yemen’s poorest and most marginalized populations were being hurt worst, in particular the children from the “mumasheen” community, a traditionally marginalized caste that is distinguished largely by their darker skin and African heritage. “The ongoing conflict in Yemen is a double tragedy for the muhamasheen,” Rashed wrote. “Even before the fighting escalated in March, they languished at the margins of society, suffering from persistent discrimination, largely based on prejudice towards their dark skin and African origins.” Now the group are among those most frequently displaced and forced to live in refugee camps.

“I never bothered being classified as muhamasheen in school, or in the public park or even in my neighbourhood. But now it does bother me in the camp. I miss my house and friends. I miss life back at my home.”

Despite aid flooding into the region on behalf of groups like UNICEF, Rashed reports, “the needs remain enormous. It’s a race against time for children like Jamal and around 10 million others across Yemen who are in urgent need of assistance.”