It appears that Kaepernick has started a movement with his silent protest during the national anthem during a pre-season game on August 26. Kaepernick said his “taking a knee” was to protest racial oppression and police brutality in the United States.

Maury players take a stand by taking a knee during national anthem https://t.co/nPBnn8wpQg

The announcer of the Friday night football game at McKenzie High School in Alabama’s Butler County had something to say to those who may choose not to stand for the national anthem.

“If you don’t want to stand for the national anthem, you can line up over there by the fence and let our military personnel take a few shots at you since they’re taking shots for you,” the announcer said at the game versus Houston County High School, according to Facebook poster Denise Crowley-Whitfield.

The announcer was identified as Pastor Allen Joyner, of Sweet Home Baptist Church in McKenzie, according to Joyner’s relatives and friends, who also posted to Facebook and praised the statement. 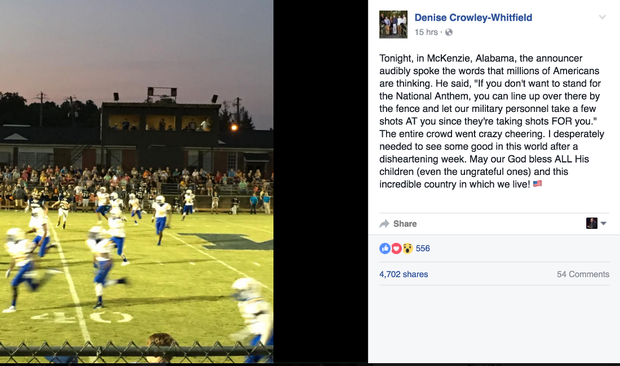 A high school sports announcer in Alabama suggested National Anthem protesters should be shot at by the military. (Facebook screenshot)