GUATEMALA CITY, GUATEMALA — The unfolding of events since U.S. President Donald Trump announced his unilateral recognition of Jerusalem as Israel’s capital, against international law and U.N. resolutions, revealed the historical bond between the settler-colonial state and Guatemala — the latter being the first country after the U.S. to declare its intention to move its embassy to Jerusalem.

Writing on his official Facebook page, Guatemalan President Jimmy Morales stated that the decision was taken in light of the historical ties between Israel and Guatemala, thus making the embassy’s relocation “of major relevance.” Guatemala was one of the countries with an embassy based in Jerusalem prior to 1980 when the U.N. called for the withdrawal of such embassies after Israel proclaimed ownership of the entire city.

Morales’s statement was issued after the U.N. General Assembly’s non-binding resolution on Jerusalem in December 2017, which was backed by a majority of 128 to 9. The resolution called upon countries to abide by the previous U.N. Security Council resolutions and reaffirmed that the status of Jerusalem should be resolved through negotiations. It also reiterated that:

Any decisions and actions which purport to have altered the character, status or demographic composition of the Holy City of Jerusalem have no legal effect, are null and void, and must be rescinded in compliance with relevant resolutions of the Security Council.”

Guatemalan Foreign Minister Sandra Jovel gave an interview to the Times of Israel in which she stated that her country had planned the move several years back but had been unable to effect it. “Obviously, President Trump’s decision helped in a way, because we can do it together, as allied nations,” she acknowledged.

Jovel was also reported as stating that Guatemala wanted to be the first country to move its embassy to Jerusalem.

In recent years, Israel has been increasingly turning its attention to Latin America. The shift toward right-wing governments in the region, the latest example being Chile, may facilitate such diplomacy.

Adel Turjuman — a Palestinian from Jerusalem who has been living in Guatemala since the age of 14 and is a committee member of Confederacion Palestina Latino America y del Caraibe (COPLAC) — thinks that Guatemala’s influence in Latin America remains limited, explaining:

COPLAC has reasons to believe that Guatemala will not influence other countries. For instance, Honduras has announced they will not be moving their embassy to Jerusalem, even though they voted against the U.N. resolution. Panama and El Salvador, who abstained, have also said their embassies will remain in Tel Aviv. The majority of countries in the region voted in favor of the U.N. resolutions and countries such as Argentina, Mexico and Colombia abstained.”

A legal challenge from within Guatemala A look at the comments on Morales’s facebook page announcement reveals public sentiment as generally supportive of the government’s position, coming from a largely religious perspective.

In comments to MintPress News, Vinicio Mejia gave an overview of the religious and political perspectives of Guatemala that led to Morales’s decision:

President Morales’s decision to move the embassy is political; however, he framed it with religious arguments. Guatemalan society is characterized by religious divisions. The majority is Christian; there are also Catholics and Protestants. Morales supports the construction of the Jews as the ‘chosen people.’”

Vinicio Mejia stated that there were public protests by Zionists against his legal action, but he is adamant about his intention:

I am not of Palestinian origin but I believe that the decision taken by President Morales is against peace. I oppose the decision to relocate the embassy to Jerusalem because it violates freedom of religion. On political grounds, the President’s decision is wrong because it also violates international law. With his decision, Jimmy Morales has also violated his obligation to maintain Guatemala’s dignity.”

Morales’s electoral campaign slogan was “Ni corrupt, ni ladron” (neither corrupt, nor a thief), which made him a favorite candidate with the Guatemalan electorate despite his lack of political experience. However, Vinicio Mejia explained:

[By September 2017] hundreds of thousands of people protested and demanded his resignation, after he ordered the expulsion of the commissioner against corruption. He remains in power thanks to the support of the military and Protestant sects.”

Vinicio Mejia is of the opinion that with this decision, Guatemala will be “considered as a satellite of the U.S.”

Turjuman is of a similar opinion, giving consideration to Morales’s decision against the framework of corruption of which his government is accused:

I do believe that the U.S. has influenced this decision and for several reasons. Since the summer of 2017, Jimmy Morales has been under investigation for charges of corruption. Both his brother and son were in prison for the same reasons. His party is now being investigated for illicit financing. I think that he believed that if he supported Trump and the U.S. with this decision, he would be in some way ‘protected.’” 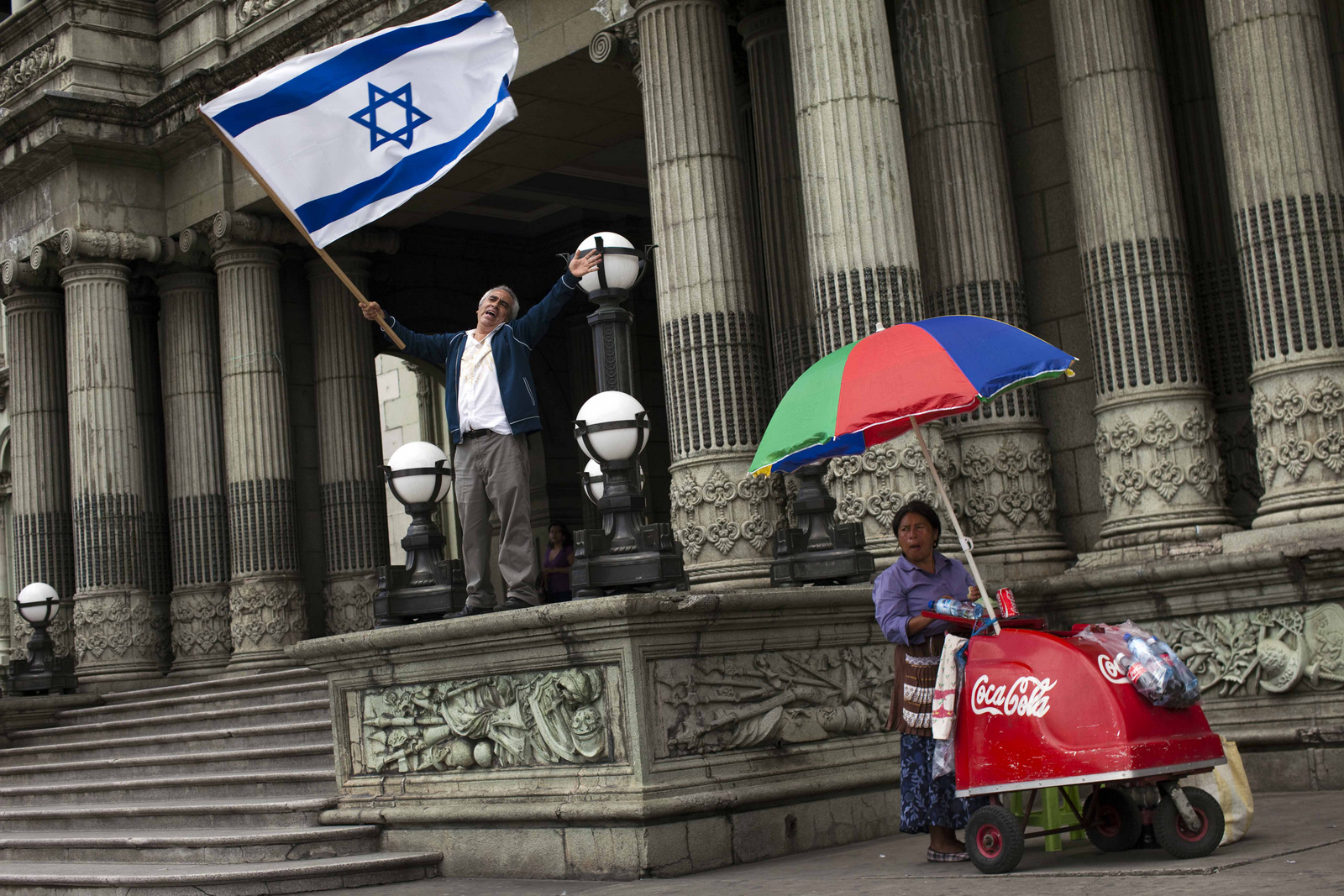 A man waves an Israeli flag during a protest against Guatemala’s President Alvaro Colom decision of supporting the creation of a Palestinian state, in Guatemala City, Monday, Oct. 3, 2011. (AP/Rodrigo Abd)

Guatemala’s political dignity, however, is tainted with the historical support that its governments gave to the Zionist settler-colonial project. The country’s support for Zionist ideology was crucial for Israel to gain recognition at an international level as a state after the massacres, displacement and ethnic cleansing it perpetrated during the Nakba of 1948. It was also one of the first countries to recognize Israel as a state in 1948.

Guatemalan Ambassador to the U.N. Jose Garcia Granados, who also formed part of the U.N. Special Committee on Palestine, promoted Zionist ambitions to the U.N. General Assembly in 1947 by stating, in derogatory comments, that Palestinians were inferior and hence had no right to land:

He referenced Spanish colonial conquests of Latin America to support the colonization of Palestine and Palestinians by Zionism.

In 1959, Guatemala was the first Latin American country to have an embassy in Jerusalem until the U.N. passed Resolution 478 in 1980. That resolution refuted Israel’s Basic Law — which declared Jerusalem as Israel’s capital — as a violation of international law and called upon countries with embassies in Jerusalem to withdraw.

Israel’s involvement in Guatemala also mirrored what colonialism did to Palestine. The euphemism of pacification — which in Guatemala consisted of the murder of over 100,000 civilians, with the aim of destroying indigenous populations and the possibilities of struggle against right-wing governments and dictatorships — was inspired by Israel’s ethnic cleansing of Palestine.

When General Rios Montt, with the help of Israel, came to power in Guatemala through a coup in 1982, a “Plan of Assistance to Conflict Areas” (PAAC) was launched, with its director, Colonel Eduardo Wohlers, stating:

Many of our technicians are Israeli trained. The model of the kibbutz and the moshav is planted firmly in their minds. I think it would be fascinating to turn our highlands into that kind of system.”

In 2016, after assuming the presidency, Morales embarked upon a state visit to Israel, prompting remarks from an unnamed Israeli diplomatic official that although former president Otto Perez Molina was the first Guatemalan president to visit Israel in 2013, he was “not committed to Israel to the same extent” as Morales. A protester with a Guatemalan flag over his shoulders walks away from Congress in Guatemala City, Jan. 16, 2017. after an extraordinary session ended, where Lawmakers repealed a recently passed bill that reduced the punishment for illegal campaign financing. Riot police dispersed the protesters with batons and pepper spray. (AP/Moises Castillo)

Turjuman emphasizes that there is a divide in understanding the Palestinian struggle within Guatemalan society, which is partly due to education, media bias, religion and the country’s historical memory:

Very few people in Guatemala understand the Palestinian struggle, and those that do are mainly intellectuals or else highly educated, as is the case in most Latin American countries. The Palestinian struggle in most media outlets is not explained correctly and often has a bias favoring Israel. Therefore it is natural that the people’s perception of the struggle if they do not choose to explore the issue further themselves, will reflect the government’s stance.”

Morales’s diplomatic stance in support of Israeli colonization, therefore, brings out a range of reactions that stand in contrast to each other. Turjuman says:

Many Guatemalans do not have an opinion and remain neutral, while 40 percent of the population is Christian evangelical and supports this diplomacy. There is also a minority that is against it for humanitarian reasons.”

Turjuman refers to the indigenous people of Guatemala who were prosecuted under the Rios Montt dictatorship:

Indigenous political parties are against the decision to move the embassy because. during the internal conflict in Guatemala when the military dictatorship was prosecuting the population and the U.S. placed an embargo on the sale of weapons to Guatemala, Israel stepped in to provide the dictatorship with weapons. They believe that Guatemala is playing a big role in harming world peace.”

There are no state restrictions on activism for Palestine, Turjuman noted. However, he adds:

Activism on a big scale is not very strong. The Palestinian community here is a small one and we work hard for our cause. We also have the support of other Guatemalan activists and friends who believe in our struggle. But the country’s political and religious landscape, as I explained, hinders widespread mobilization.”

The possibility of an economic boycott Workers haul coffee beans at a plantation in Alotengango, Guatemala. Coffee is the main export for Guatemala and a boycott from Arab countries that import large amounts of coffee and cardomam could have real economic consequences for the country. (AP/Moises Castillo)

In response to Morales’ announcement of Guatemala’s decision, the Palestinian Liberation Organization is threatening a boycott of Guatemalan exports to Arab countries.

We’ll be conducting an overall assessment of all our alliances, and will evaluate our relations based on mutual interests, with a clear eye as to who is genuinely supporting the cause of peace in Palestine and who is against our national interests.”

Guatemalan news outlet Estrategias Y Negocios noted that 18 out of 24 Arab countries are buyers of Guatemalan produce. Exporters fear that the favorable trading position for Guatemala — given that it exports more products than it imports — may be affected if a boycott is enforced. The outlet referred to comments made by the director of the Association of Coffee Exports, Jean Paul Brichaux, who insisted that trade relations should be maintained and consolidated.

A similar opinion was voiced by the director of Grupo 3K, Jorge Vinicio Kress, who stated that applying trade regulations and tariffs to Guatemalan products would impact the market.

Foreign Minister Jovel, however, played down these concerns, saying that the 350,000 families producing cardamom represented only 0.3% of the Guatemalan gross domestic product (GDP).

There is the economic side to the issue, particularly with cardamom, which is a big crop in Guatemala and mainly exported to Arab countries. People in this business are frightened by the possibility of a boycott from Arab countries on this product.”

Such a boycott, Turjuman says, will instigate discontent against the government:

The export of cardamom and other spices is Guatemala’s largest trade relation with Arab countries. It makes up a total income of $300 million per year for the country. If the boycott happens, it will affect 350,000 small producers in the poorer regions of Guatemala, who are dependent upon the production of cardamom and its export to Arab countries.”

Ramona Wadi is an independent researcher, freelance journalist, book reviewer, and blogger. She writes about the struggle for memory in Palestine and Chile, historical legitimacy, the ramifications of settler-colonialism, the correlation between humanitarian aid and human rights abuses, the United Nations as an imperialist organisation, indigenous resistance, la nueva cancion Chilena and Latin American revolutionary philosophy with a particular focus on Fidel Castro, Jose Marti and Jose Carlos Mariategui. Her articles, book reviews, interviews, and blogs have been published in Middle East Monitor, Upside Down World, Truthout, Irish Left Review, Gramsci Oggi, Cubarte, Rabble.ca, Toward Freedom, History Today, Chileno and other outlets, including academic publications and translations into several languages.