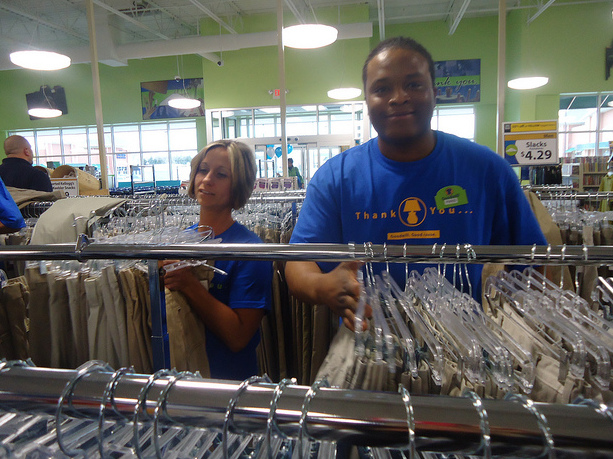 Goodwill employees receive as little as 22 cents per hour, significantly lower than the federal minimum wage of $7.25.

Goodwill workers setting up the retail store in the Geist and Fishers area in Indiana on Feb. 13, 2012. (Photo/TownPost Network via Flickr)

Due to a loophole in the Fair Labor Standards Act of 1938, employers can obtain a special wage certificate that allows them to pay employees with disabilities a wage much lower than the federal minimum wage. A company that takes advantage of this Depression-era loophole is one of the most well-known nonprofits in the United States: Goodwill.

Currently employing more than 100,000 employees nationwide, Goodwill says that about 7,300 of its employees at about 109 different Goodwill locations in 38 states are subject to the special minimum-wage exemption, which the charity says allows them to “save money and hire more workers.”

But advocates for the disabled argue employers shouldn’t pay subminimum wages to employees because that’s telling someone they are not worth it, and creates a system that tells disabled employees they are not as good as the rest of the workforce.

The loophole law, Section 14(c) of the FLSA, known as the Special Wage Certificate Program, is based on the assumptions that people with disabilities are not as productive as able-bodied individuals, and that a commensurate wage tied to a disabled workers productivity increases employment opportunities for the disabled.

Currently about 300,000 workers nationwide are affected by this legal loophole.

An analysis of Goodwill employee wages by Watchdog.org found that while Goodwill pays some disabled employees as little as 22 cents per hour, which is much lower than the current federal minimum wage of $7.25 per hour, while some of the nonprofits top executives collectively earned more than $53.7 million in 2012.

Although Goodwill’s mission is “to enhance the dignity and quality of life of individuals and families by strengthening communities, eliminating barriers to opportunity, and helping people in need reach their full potential through learning and the power of work,” at the end of the day the nonprofit is a multi-billion dollar business, which raked in $4.89 billion in revenue in 2012 alone.

Of that revenue, $3.53 billion was generated from sales at the nonprofits more than 2,700 shops, while the remaining $87 million came from government grants.

Besides generous paychecks for Goodwill’s executive team members, the organization spends more than $39 million on travel-related expenses annually and more than $100,000 in yearly conference expenses.

“Goodwill Industries is one of the most well-known charitable organizations in the United States, but most members of the general public are unaware that Goodwill exploits people with disabilities,” said Marc Maurer, president of the National Federation of the Blind, which organized a nationwide protest of Goodwill organizations last year and has fought for years to change the policy.

“We are conducting informational protests to make the public aware of this practice that, although sadly still legal, is unfair, discriminatory and immoral,” Maurer said.

Samuel R. Bagenstos, a law professor at the University of Michigan Law School and a former deputy attorney general for civil rights, agreed with Maurer’s arguments that people with disabilities are not inherently less productive employees, and said that often times workshop employers assign jobs to people “without any connection to the abilities and background of the individuals.”

For example, in a report on the subminimum wage program, Bagenstos wrote that one college-educated woman who had cerebral palsy was paid $3 a week to assemble rubber mats.

In an interview with NBC, Sheila Leland said this is a civil rights issue, saying she had to quit her job at a local Goodwill in Great Falls, Mont., after her employer reduced her hourly wage from $3.50 to $2.75 per hour. College educated but legally blind, Leland said she can’t afford to get to work at the low-pay level, and said her employer reduced her wages despite the fact she had worked there for four years.

Although some disabled Americans are happy to work at the Goodwill despite the low wages, others call it a “dead-end job” and a “last resort” since they don’t have many other options.

Despite receiving backlash from various advocacy groups for the low wages and “exploitation” and “unethical” treatment of some of the most vulnerable people in our society, Goodwill has continued to defend its participation in the special wage certificate program, saying that in the U.S. 80 percent of people with disabilities do not have jobs.

“With 80 percent of working-age adults with disabilities in our country not participating in the workforce currently, we believe that it’s important to explore more types of opportunities,” he said. “The special minimum wage certificate is a tool to create employment for people with disabilities. It’s not the only tool.”

He added that in addition to wages, disabled employees get services like transportation and community socialization activities, but said that since many Americans have begun to express concern about the low pay the nonprofit welcomes “conversation that creates more opportunity for people with disabilities.”

Jim Gibbons, CEO of Goodwill agreed, saying that “While it is quite easy to look at this provision quickly and ask why people with disabilities should be paid less than other workers, the truth is the certificate allows Goodwill and many other employers to provide opportunities for people with severe disabilities who otherwise might not be a part of the workforce.”

Since each Goodwill entity is independently operated the stores are operated by an independent board of directors and file separate tax returns. According to Watchdog, that is likely why there are such variations in wages and financial policies at Goodwill stores, and why not all Goodwill organizations pay disabled employees less than the federal minimum wage.

Those Goodwill stores that do take advantage of the loophole have to reapply for a new certificate every two years.

For those employees that are paid the commensurate wage, Turner-Little said employers assess their productivity at least every six months in order to determine how much they should be compensated.

“They have to outline their individual productivity assessment process for the jobs that are going to be paid under the special minimum wage certificate and that has to be done both for service-type jobs as well as piece rate work – so hand assembly type work, making a product as well as providing a service,” Turner-Little said. “Then, (they) have to outline what their time-study process is going to be, all of that is contained in the application process.”

He added that employers often conduct this review process with sub-minimum wage employees more frequently than every six months, “And all that has to be documented and made available to the Department (of Labor) if they need to see it.”

But according to advocates for the disabled and current and former Goodwill employees, the review process involves a speed test, in which an employer uses a stopwatch to determine how many clothing items an employee can hang on the rack in a minute.

Employees are allowed only two mistakes. Any more and the quality of work is automatically deemed to be poor.

Despite threats from Goodwill that a change in the law could negatively impact hundreds of Goodwill employees and result in a loss of employment, in 2012 Rep. Cliff Stearns (R-Fla.) introduced a piece of legislation that would close the loophole, which Stearns called “deplorable and wrong.”

In 2013, Rep. Gregg Harper (R-Miss.) reintroduced the measure,  even though the legislation has about a 1-percent chance of being enacted, because “Meaningful work deserves fair pay.

“This dated provision unjustly prohibits workers with disabilities from reaching their full potential,” Harper said. “The current federal disability laws are hopelessly outdated and will ultimately lead to unemployment and poverty for these individuals.”