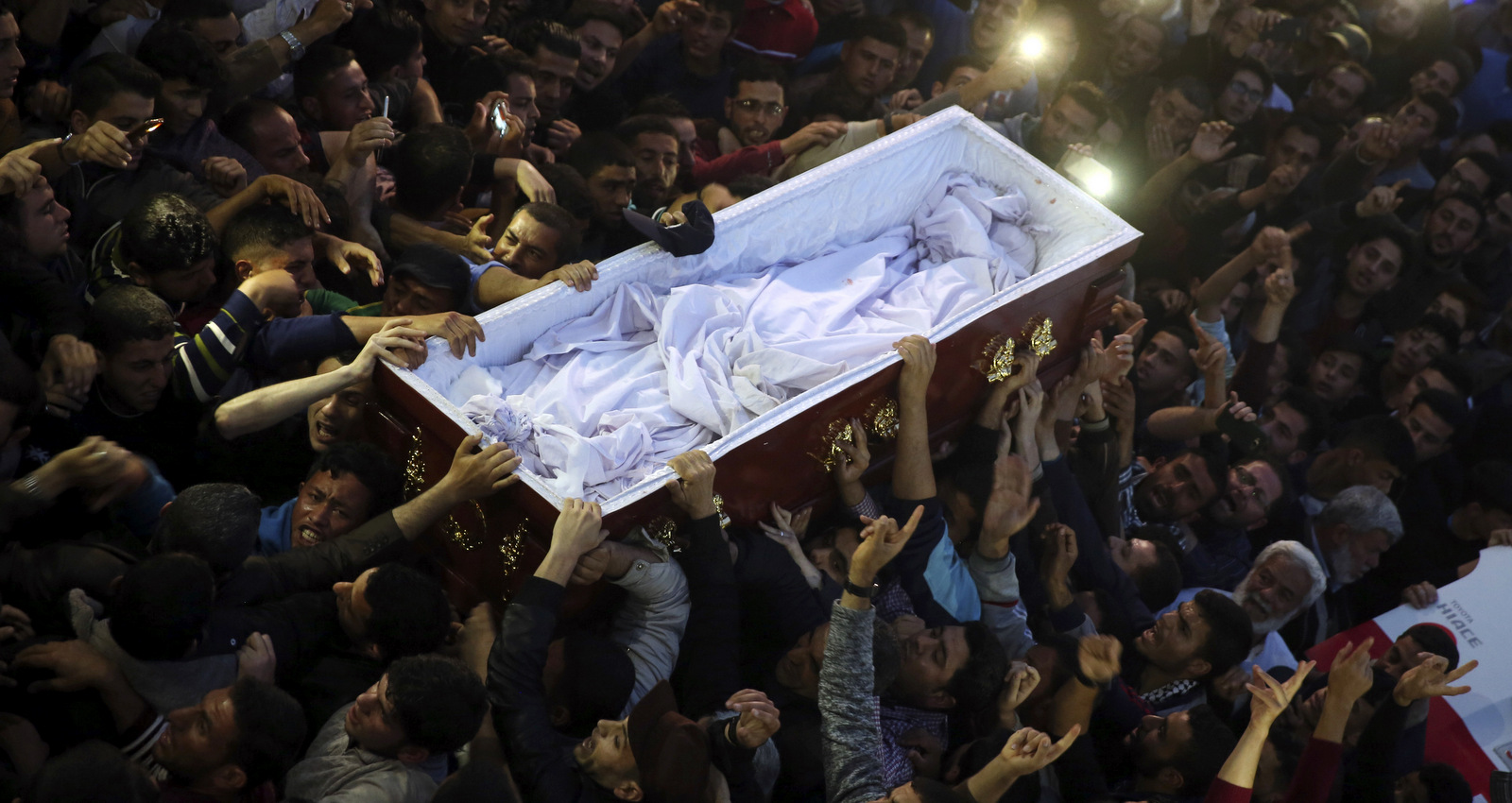 GAZA — Palestine’s Great Return March protests at the Gaza border, which commenced with the commemoration of Land Day on March 30 and are set to continue until the Nakba anniversary on May 15, have propelled Israel’s penchant for killing Palestinians to the fore. So far, 45 Palestinians have been killed by snipers and over 7,200 injured while demonstrating at the border for their right to return as enshrined in UN Resolution 194.

As the launch of the protests drew near, Israeli Prime Minister Benjamin Netanyahu announced that over 100 snipers would be placed at Gaza’s border. The rhetoric used was an attempt to distort the Return March, which is about rights, into a security concern for Israel, and thus legitimize, according to Israeli parameters, the killing of unarmed Palestinians.

Framed against the Great Return March protests at the Gaza border, Israel’s Minister of Transport, Road Safety and Intelligence, Israel Katz, warned that targeted killings of Hamas leaders would be renewed if attacks are launched against army commanders at the border.

No soldiers were harmed at the border. Rather than an empty threat, Katz’s statement reads as a veiled indication of premeditated aggression.

A day later, on Saturday April 21, 35-year-old Palestinian scientist and Hamas member Fadi Mohammed al-Batsh was gunned down by two assassins in the vicinity of his home while on his way to dawn prayers in Kuala Lumpur, Malaysia. Whether the Israeli intelligence agency Mossad was behind the targeted assassination was neither confirmed nor denied by Israel.

Last week, Haaretz reported that the assassins entered Malaysia by using fake Serbia and Montenegro passports. It is also speculated that both assassins absconded to Thailand.

There’s a tradition at this point among terrorist organizations of blaming Israel for every settling of accounts.”

Israeli media, however, promoted the narrative of the colonial state’s policy of targeted assassinations and indicated the possible involvement of Mossad, linking al-Batsh’s assassination to his scientific research by citing a co-authored paper titled “Challenges of Integrating Unmanned Aerial Vehicles in Civil Application”. Five days after the assassination, the Jerusalem Post ran an article titled “The Mossad’s Greatest Hits: From Eichmann to al-Batsh.” About al-Batsh, the article stated that the modus operandi “may fit into the Tunisia operation pattern of assassinations of weapons engineers who are threats to Israel and without leaving a trace.” Mourners carry the coffin of Palestinian scientist Fadi al-Batsh, after his body crossed into the Gaza Strip from Egypt during his funeral April 26, 2018. (AP/Adel Hana)

The reference to Tunisia concerned the assassination of aeronautical engineer Muhammad al-Zawari, who was killed in Sfax in December 2016 outside his home. According to Hamas, Al-Zawari was part of the resistance movement  and specialized in drone development. A report by Al Jazeera had also stated that al-Zawari had developed the drones used by Hamas in 2014 during Israel’s Operation Protective Edge.

In al-Zawari’s case, the identified suspects are of Bosnian nationality. During a press conference organized by Hamas in Beirut, the movement claimed the targeted assassination was the work of “Mossad agents carrying Bosnian passports.” Tunisia is reported to be in discussions with Bosnia to extradite the suspect, who was arrested in Croatia in March 2018. The suspect is currently detained under extradition custody in Croatia, and Bosnia is seeking to impede his extradition.

In December 2005, Israel’s High Court upheld the “right” of the state to resort to targeted assassinations, in response to a petition submitted in 2002 by the Public Committee against Torture in Israel and the Palestinian Society for the Protection of Human Rights and the Environment, which argued that the practice was illegal and violated international law. The petition was submitted within the context of the Second Intifada, when Israel embarked upon a series of targeted assassinations of Hamas leaders.

The concluding remarks of the court judgment ensured that Israel was allowed to speculate and given the freedom to determine whether or not a targeted assassination would be permissible:

Israel enjoys further impunity in this regard based on the fact that there is no standard definition of targeted assassinations in international law.

A history of targeted assassinations

Many targeted assassinations of Palestinian leaders have been attributed to Mossad. On July 8, 1972, Mossad assassinated Ghassan Kanafani, a Palestinian writer and political leader from the Popular Front of the Liberation of Palestine, by a car bomb in Beirut. His 17-year-old niece, Lamis, also died in the explosion.

Mossad is also said to be behind several assassinations of Palestinian Liberation Organisation (PLO) members. In what was dubbed as “Operation Spring of Youth” in 1973 in Beirut, Mossad raided the flats of three PLO members — Muhammad Yousef al-Najjar, Kamal Adwan and Kamal Nasser — and gunned them down. Adwan’s head was severed from the body as a result of around 60 bullets fired into his neck.

On October 26, 1995, Islamic Jihad founder Fathi Shqaqi was killed by two assailants in front of the Diplomat Hotel in Sliema, Malta. Shqaqi was shot five times at point blank range.

In 1997, Mossad poisoned former Hamas leader Khaled Mesha’al in Jordan. A diplomatic intervention by King Hussein saved his life as Mossad turned over the antidote.

Since the Second Intifada, Israel’s targeted assassinations of Palestinian leaders have shifted towards Hamas. Salah Shehadeh, leader of Al-Qassam Brigades, was killed on July 23, 2002 in Gaza City, when the Israeli Defence Forces (IDF) dropped a one-ton bomb onto his house. Fifteen people were killed in the attack.

Sheikh Ahmed Yassin was murdered upon exiting a mosque on March 22, 2004. Missiles were fired from an Apache helicopter, killing him and seven other bystanders.

Mossad is also said to have been behind the assassination of Mahmoud al-Mabhouh, one of the founders of al-Qassam Brigades, on January 20, 2010, in Dubai. Tests on blood samples confirmed he was electrocuted.

On November 14, 2012, Ahmed Jabari, second in command of Hamas’s military wing, was killed by a drone strike on his car in Omar Mukhtar Street. Uri Brodsky, believed to be a Mossad agent involved in the assassination of Mahmoud al-Mabhouh, is to a court in Warsaw, Poland, Aug. 5, 2010. (AP/Czarek Sokolowski)

In an interview with the Times of Israel, Bergman states:

I want to say, that from the very beginning of the state, Israeli leaders thought that secret operations and assassinations far beyond enemy lines were a useful tool to change history, or to do something to reality, without resorting to all-out war.”

The statement is revelatory on several grounds. Apart from indicating Mossad’s worldwide operations, it also closes in on two main issues which are central to the current context of Israel’s resorting to targeted assassinations. The targeting of individuals who, if allowed to work in anti-colonial struggle, can embark upon building a resistance movement that goes beyond mere resilience, should dispel mainstream depiction of Israel’s aggression on Gaza as “war”. By Israel’s admission and actions, there is no war, but rather a premeditated action against a population by targeting individuals who can contribute to Palestinian security and, as a result, capacity to further their cause and their rights.

Second, changing history and reality, as stated by Bergman, can also be applied to the Gaza context. It is not only the fact that Israel is choosing strategy over diplomacy, as Bergman says within the context of his research. Palestinians in the occupied West Bank and Gaza are actively involved in resistance. However, the periodical Israeli assaults upon Gaza, and Hamas’ attempts to defend the enclave, have propelled the movement’s visibility when it comes to armed struggle. The movement also prioritizes education as a revolutionary goal. During Operation Protective Edge in 2014, Israel directly targeted higher educational facilities, prompting UNESCO to release a report documenting the damage done to infrastructure — 14 educational facilities were significantly damaged. In addition, 421 students were murdered during the operation, making up 27.4 percent of Gaza’s death toll.

To eliminate Palestinian resistance, Israel has made it a point to target segments of Palestinian society, or individuals, that have potential to develop continuous anti-colonial struggle. It is a strategic decision for Israel to focus on the link between education and resistance — hence the high number of students murdered during Operation Protective Edge, the Palestinian youths murdered by snipers at the Great Return March, and the targeted assassination of Palestinian intellectuals and scientists who have the potential to lead a structured and continuous resistance.

Al-Batsh’s assassination can be seen as merely another strike against Hamas — the latest in a series of targeted killings that seek to weaken the movement’s capacity to develop its own potential for defense in its limited circumstances.

Yet it is the limited circumstances that should provoke further insight into al-Batsh’s assassination. Since 2014, Palestinian Authority leader Mahmoud Abbas has not ceased calling for Hamas to hand over complete control of Gaza, including relinquishing armed resistance. As this appeal was refused repeatedly by Hamas, Abbas retaliated through sanctions and withholding of financial assistance, piling further hardships upon the entire enclave that is still reeling from the damage and displacement as a result of Operation Protective Edge.

There is no option for Palestinians other than resistance to the collaborative efforts by Israel and the Palestinian Authority to push Gaza into an irreversible deterioration. Al-Batsh’s assassination is part of the former’s plan to reduce the possibilities of resistance for Palestinians. For Abbas, who has ridiculed resistance even when Palestinians were being massacred in 2014, the loss of al-Batsh might trigger other attempts at fostering political disunity among Palestinians. Apart from the political isolation enforced upon Gaza, it is the lack of opportunity to develop its military capabilities further that has derailed resistance. It is clear that Israel will not take any chances of permitting Hamas to alter the current implosion. Its view is that, for Israel to survive, Palestine’s possibilities must be wiped out, whether the means used are targeted assassinations, sniper fire, or precision targeting of a civilian population.

Top Photo | Mourners chant slogans while carry the coffin of Palestinian scientist Fadi al-Batsh, after his body crossed into the Gaza Strip from Egypt, during his funeral at Al Emari mosque in Jebaliya on Thursday, April 26, 2018. (AP Photo/Adel Hana)