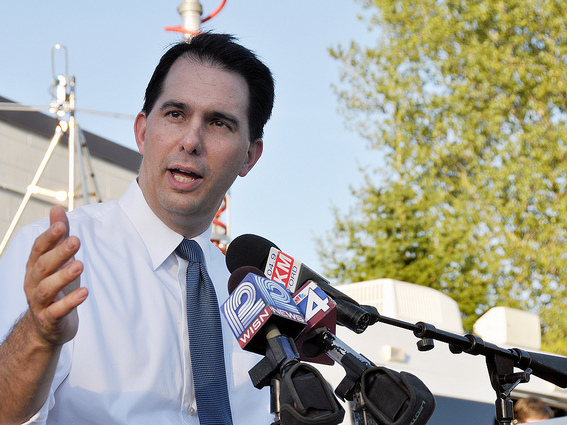 Subpoenas delve after information related to fundraising and organizing of Walker’s recall campaign.

Days before Wisconsin’s Republican Gov. Scott Walker was set to launch his national TV book tour, his campaign and associated organizations in the state were subpoenaed for an investigation into his victorious recall campaign.

While the details of the investigation have not been made public, the target of the subpoenas is information related to the fundraising and organizing of Walker’s successful recall campaign, during which he outspent his opponents $84.5 million to $52.6 million. PR Watch, an arm of the Center for Media and Democracy, cited the investigation as one related to possible campaign finance violations during the recall campaign. However, the nature of the case allows the details to remain hidden, as it’s classified as a “John Doe” case, and therefore, a secret investigation. Daniel Bice of the Journal Sentinel first broke the story, using an anonymous source to verify that the investigations had included five counties, likely due to a new state law that allows lawmakers to be investigated in their home county. The information that has been released has largely been leaked, although Wisconsin Club for Growth Director Eric O’Keefe claims he is involved in the subpoena. He told the Wall Street Journal that he knew of at least three individuals who had their homes raided. The Wall Street Journal has indicated it has seen copies of the subpoenas, indicating they involve the collection of activity related to recall campaign finances. “Copies of two subpoenas we’ve seen demand ‘all memoranda, email . . . correspondence, and communications” both internally and between the subpoena target and some 29 conservative groups, including Wisconsin and national nonprofits, political vendors and party committees,” the Wall Street Journal wrote in an editorial. The newspaper also indicates that one subpoena demands organizations disclose where their money is coming from. The parties included in the Subpoena include those notorious with right-wing politics, such as Americans for Prosperity, American Crossroads, Friends of Scott Walker and Republican Party of Wisconsin. The question for those monitoring the situation is whether the organizations were serving as front funding groups for the Koch brothers, creating a twisted web of donations that potentially allowed Koch funds to flow into the state undetected, with the end goal of hoisting Walker to victory.

The Center for Media and Democracy, based in Wisconsin, is focusing on O’Keefe’s Wisconsin Club for Growth. During the recall elections of 2011 and 2012, the organization donated $9.1 million in support of the governor.

The organization never revealed where all that money came from, yet the Center for Media and Democracy indicates that it receives swaths of money from outside conservative forces, including the Koch brothers. “Although the group does not disclose its donors, information that can be gathered from tax filings shows that Wisconsin Club for Growth group took in funds from some of the top Republican donors and Koch-connected dark money conduits in the country, and in turn shuffled millions to other organizations that spent money on ads in 2011 and 2012, all while keeping Wisconsin voters in the dark about the true source of the funds,” the Center for Media and Democracy’s Brendan Fischer wrote. The organization was allegedly used as a channel for funds to Koch funds to flow through Wisconsin. Wisconsin Club for Growth funded Citizens for a Strong America entirely, another big donor to the Walker recall campaign. Jobs First Coalition received half of its funding from Wisconsin Club for Growth. The case unfolding in Wisconsin is similar to one that occurred in California — one which resulted in the state’s largest campaign fine. The culprits were Charles and David Koch, who were found guilty of funneling undisclosed funds into the state to defeat ballot initiatives. At the forefront of that scandal were two Koch organizations: the Center to Protect Patients Rights and Americans for Responsible Leadership. Combined, the two organizations were fined $16 million. The common trend in California and Wisconsin is a tangled web of donations — stemming from the Koch brothers, yet flowing through numerous front organizations that provide money to one another, creating what Fischer refers to as a confusing mess when it comes to tracking down the true source of funding. “It seems like this goal of this is to help disguise donors, to blow some smoke around the dark-money groups,” Fischer told the Milwaukee Express. “These conduit groups basically provide donors with extra protection and allow them an extra layer of anonymity. Instead of the donors being listed as David Koch or Charles Koch, the donor will be the Center to Protect Patient Rights.” Aside from having similarities, the campaign debacle in California is also directly linked to Wisconsin’s current situation. The Center to Protect Patients Rights donated money to Wisconsin’s Club for Growth. According to the Milwaukee Express, IRS documents obtained from the Koch organization in the middle of the California scandal donated $225,000 to the organization.

All of the organizations are considered social welfare organizations, a title worthy of a tax exempt status and the ability to hide donors. They are, however, required to report where their funding goes.

Social welfare organizations, by definition, are not allowed to campaign for one specific candidate. They can, however, campaign for causes that line up with a particular candidate or political party. But using those organizations to funnel money to campaign donors is a no-no. Wisconsin’s Club for Growth, for example, was a known supporter of Walker and his bid to eliminate collective bargaining rights, a move that sparked the recall of him and state Republican senators. R.J. Johnson, considered a top adviser for Wisconsin’s Club for Growth, is the former top campaign aide for Walker. In essence, this was an organization that, despite being labeled a “social welfare organization,” existed to further the same agenda Walker has. The question now is what will come of the John Doe investigation. Because of the secretive nature of the case, a timeline has yet to be determined. In the meanwhile, a federal judge will be sifting through the communications of the 30 conservative organizations, determining whether any foul play existed amid the Walker recall campaign.