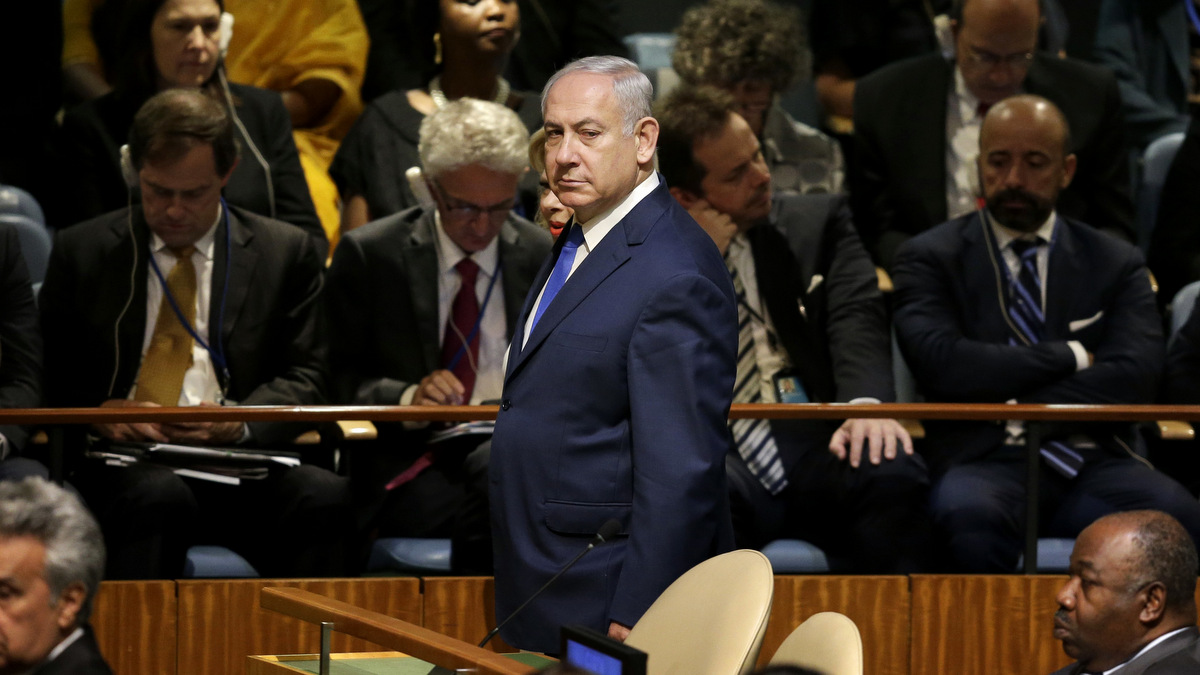 The speech was full of downright lies and “alternative facts”. Here is the reality.

Yesterday, Israeli leader Benjamin Netanyahu spoke before the United Nations in a speech that served as a kind of appendix to Donald Trump’s controversial, bellicose declaration that was delivered hours earlier.

Both speeches predictably focused on Iran and both leaders told a great deal of untruths and half-truths about the situation.

Here are some of the most glaring untruths, followed by a factual explanation of the situation.

The full quote from Netanyahu is as follows:

“Well as you know, I strongly disagreed. I warned that when the sanctions on Iran would be removed, Iran would behave like a hungry tiger unleashed, not joining the community of nations, but devouring nations, one after the other. And that’s precisely what Iran is doing today.

From the Caspian Sea to the Mediterranean, from Tehran to Tartus, an Iranian curtain is descending across the Middle East. Iran spreads this curtain of tyranny and terror over Iraq, Syria, Lebanon and elsewhere, and it pledges to extinguish the light of Israel”.

In reality, Iran occupies zero countries and has not occupied any country in its modern history. By contrast, Israel has occupied part of Syria, the Golan Heights, since 1967. This occupation is condemned by the United Nations and all five permanent members of the Security Council, including the United States.

The other country on Netanyahu’s list that has been occupied by Israel and not Iran is Lebanon. After invading Lebanon in 1982, Israel set up a permanent occupying force in southern Lebanon between 1985 and the year 2000. Israel maintained a presence in the country until 2006 when Israeli forces retreated in the face of strong Hezbollah defenses.

Israel continues to occupy Palestine according to the UN and most impartial observers. It previously occupied Egypt, the Jordanian West Bank and in 1981, illegally bombed Iraq.

Iran, by contrast, has done no such things. The Iranian assistance provided to Syria during the conflict in the country has been done under a legal agreement with Damascus based on mutual friendship and a common cause against Salafist terrorism. Iran’s training of some Iraqi volunteers has been conducted on a similar basis.

By no logical stretch of the English language, could this been seen as “devouring nations”.

2. “We will act to prevent Iran from establishing permanent military bases in Syria for its air, sea and ground forces”

This statement while designed to sound like a defensive measure is actually an admission of a premeditated war crime. No foreign country can use the threat of force to blackmail its neighbors or anyone else when it comes to internal affairs.

If Syria invites Iran to establish some sort of permanent presence in the country, that is a matter which is strictly between Syria and Iran. To use this as a pretext for an act of war, is put simply, a war crime.

3. “Syria has barrel-bombed, starved, gassed and murdered hundreds of thousands of its own citizens and wounded millions more, while Israel has provided lifesaving medical care to thousands of Syrian victims of that very same carnage. Yet who does the World Health Organization criticize? Israel”.

This one is full of outright lies. First of all, prior to the conflict, not only were all Syrians fed, but food prices were subsidized by the government, making nutritious foodstuffs more affordable in Syria than in most parts of the region.

Even today, Syrians are not starving, but due to western backed sanctions, food is more expensive and medicine is both more expensive and more scarce than they were prior to the conflict with Salafist terrorism. None of this has to do with the Syrian government nor its partners who continue to deliver aid.

Syria has not possessed any chemical weapons since 2013. In a joint effort by both Russia and the US, the Organisation for the Prohibition of Chemical Weapons certified that by early 2014, there were no chemical weapons left in the Syrian government’s hands.

In spite of this, Syria has never used chemical weapons, not on a foreign power and not internally.

The only chemical weapons in Syria today, are those in the hands of terrorists who are fighting Syria.

In respect of the Israeli hospital program. These hospitals have not been open to ordinary Syrians, let alone to the Syrian soldiers fighting ISIS and al-Qaeda.

Instead, the hospitals have perversely been used to give medical treatment to al-Qaeda and ISIS fighters who are known as some of the most violent terrorists in the world.

4. “Two years ago, I stood here and explained why the Iranian nuclear deal not only doesn’t block Iran’s path to the bomb, Iran’s nuclear program has what’s called a sunset clause”.

Not only does the JCPOA (aka Iran nuclear deal) prevent Iran from developing nuclear weapons, but Barack Obama’s administration admitted this openly. The EU and Russia continue to express their support of the deal and the US State Department, EU and UN have all agreed that Iran is in full compliance with the deal.

The only country in the Middle East to develop and maintain nuclear weapons is Israel. Furthermore, Israel obtained its nuclear weapons without international sanction and to this day, refuses to admit to having nuclear weapons. As such, Israel is not a signatory to the Treaty on the Non-Proliferation of Nuclear Weapons. Israel is one of only four nations in the world to have never signed the treaty.

Israeli historian Avner Cohen, as well as the award-winning US journalist Seymour Hersh, have confirmed the existence of the so-called ‘Samson Option’, wherein Israel will deploy its nuclear weapons if it feels its security is threatened.

During his speech at the UN, Netanyahu alluded to the ‘Samson Option’ in saying,

“Those who threaten us with annihilation put themselves in mortal peril. Israel will defend itself with the full force of our arms and the full power of our convictions”.

In this sense, Iran has much more to fear form Israel than Israel has to fear from Iran, yet ironically it is Israel that continually protests about its own fears.

With this record, it becomes clear who should be afraid of whom.