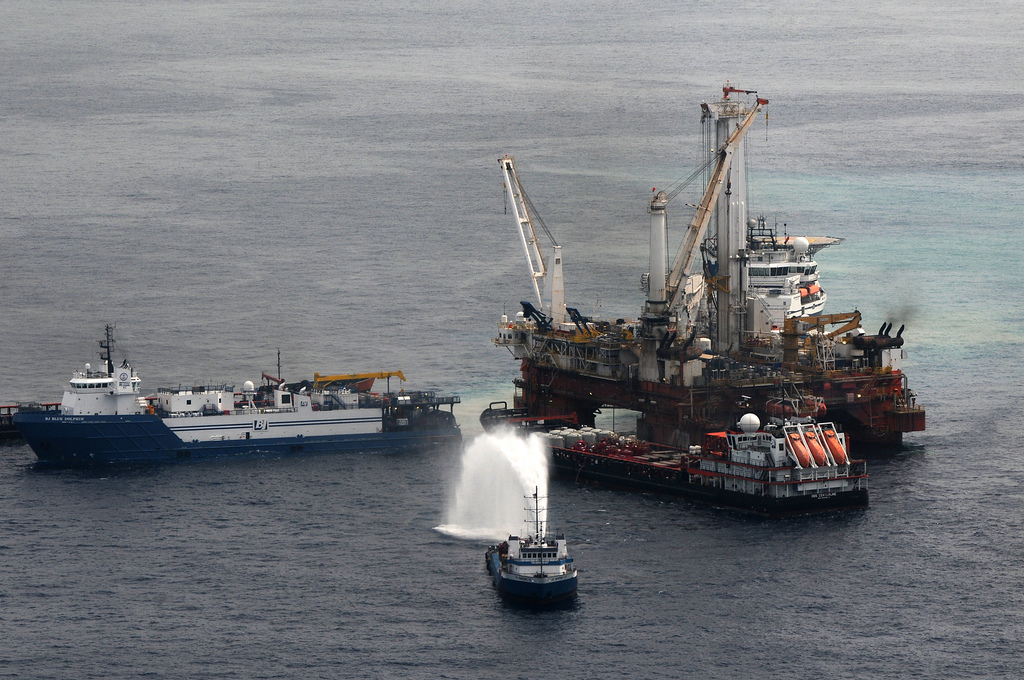 Experts: US ill-prepared for oil spill off Cuba

Photo by Deepwater Horizon Response   MIAMI (AP) — The U.S. is not ready to handle an oil spill if drilling off the Cuban coast should go awry but can be better prepared with monitoring systems and other basic steps, experts told government officials Monday. The comments at a congressional subcommittee hearing in the Miami […]

MIAMI (AP) — The U.S. is not ready to handle an oil spill if drilling off the Cuban coast should go awry but can be better prepared with monitoring systems and other basic steps, experts told government officials Monday.

The comments at a congressional subcommittee hearing in the Miami Beach suburb of Sunny Isles come more than a week after a huge oil rig leased by Spanish energy giant Repsol YPF arrived in Cuban waters to begin drilling a deep water exploratory well.

Similar development is expected off the Bahamas next year, but decades of tense relations between the U.S. and Cuba makes cooperation in protecting the Florida Straits particularly tricky. With memories of the Deepwater Horizon spill in the Gulf of Mexico still fresh, state and federal officials fear even the perception of any oil flowing toward Florida beaches could devastate an economy that claims about $57 billion from tourism.

Florida International University Professor John Proni told officials to be proactive. He is leading a consortium of researchers on U.S. readiness to handle any spill.

“For the last few years, my colleagues and I have been visiting Washington to say the best time to start preparing for an oil spill is before it happens,” Proni told leaders of the House Transportation and Infrastructure Committee, in a hotel-turned-hearing room overlooking turquoise waters. Proni said he has seen little action from officials in Washington, though they responded positively.

U.S. officials have turned attention to preventing future spills since the Deepwater Horizon rig leased by the energy company BP exploded in April 2010, causing the well to blow out and unleashing millions of gallons of oil in the Gulf of Mexico. Crude washed up on pristine shoreline, soiled wildlife and left a region dependent on tourist dollars scrambling to rebuild its image.

Experts testified current estimates have surface oil — in event of any spill off Cuba — moving up to 3 mph due to the Gulfstream, but that the fast-moving current would make it difficult for any crude quickly crossing the Florida Straits.

Rear Adm. William Baumgartner, commander of the Coast Guard region that covers the Florida Straits, said a likely scenario would have oil spreading and reaching U.S. waters in six to 10 days.

Proni said he wants a system that can monitor changes in underwater sounds to immediately alert U.S. officials to a spill or other unusual activity. He also wants the U.S. to invest in developing better computer models to predict oil movement and to assess the existing ecosystem and the type of oil Cuba possesses. That way, experts can better pinpoint any possible damage and find out if it came from Cuban wells.

Proni said the fast-moving water would make it difficult to burn the oil or strain it, as was done to halt the spread of the Deepwater Horizon spill. He added that more research is needed on the risks of using chemicals that break down the oil into tiny droplets.

Baumgartner said his agency has been working on a response plan. The Coast Guard and private response teams have been granted the required visas under the U.S. embargo to work with the Cuban government and its partners should a problem arise. Since March 2011, the agency has been working with Repsol, and U.S. officials inspected the rig earlier this month.

The rig was given a good bill of health. Asked Monday about the rig’s readiness, though, the U.S. Department of Interior’s regional director for the Bureau of Safety and Environmental Enforcement Lars Herbst said inspectors found some minor problems with the safety systems that would have kept it from being allowed to drill in U.S. waters. He said it was unclear whether repairs had been made.

Jackie Savitz a senior scientist with the nonprofit Oceana, who attended the hearing, said she was glad lawmakers were so concerned but hoped they would express similar interest in offshore drilling in areas such as the Gulf of Mexico, where many rigs are already drilling for oil.

U.S. Rep. Mario Diaz-Balart, one of three South Florida Cuban-American lawmakers who attended the hearing, said the concerns over Cuba’s oil exploration were particularly pressing because of the political context and hopes the Obama administration would quickly respond to the consortium’s concerns. But he agreed Proni’s proposals could be applied to the Gulf of Mexico too.

Meanwhile, U.S. Rep. Ileana Ros-Lehtinen, has authored a bill that would sanction those who help Cuba develop its oil reserves.

“We can’t stop Repsol from drilling now, but we can act to deter future leaders to avoid the Castro brothers becoming the oil tycoons of the Caribbean,” she told the committee.