Two Walrus surface in front of the Arctic Sunrise, outside of a Walrus colony/ haul out which is on the west side of Kvitøya, Svalbard archipelago.

Norwegian officials are lobbying to kill an EU resolution calling for an end to offshore oil drilling in Arctic waters, according to documents obtained by Energydesk.

A letter from Norwegian MP Eirik Siversten – who leads the delegation for Arctic parliamentary cooperation – urges members of the European Parliament “to delete in the plenary vote” the passages in support of an Arctic oil drilling ban.

The Nordic press is reporting on a concerted effort by both politicians and the oil lobby to block the proposed ban.

Europe will need to phase-out the use of fossil fuels in the coming decades if the world is to avert the catastrophic impacts of climate change.

NorthNorway’s European Office told Energydesk it is important that political figures comment on “decisions that may have consequences for the regions they lead.” The European Parliament is due to vote next week on a resolution on an integrated EU policy for the Arctic.

There are three articles in this resolution that have drawn the ire of the Norwegian oil lobby.

Paragraph 13 pushes for “a future total ban on the extraction of Arctic oil and gas in order to achieve the goal of a low carbon economy.”

Paragraph 14 supports this by calling “for a ban on oil drilling in the icy Arctic waters of the EU and the EEA.”

And paragraph 41 says the EU “must cooperate with international partners to put an end to offshore drilling in the Arctic waters.”

Documents from Norwegian officials – both letters, plus an unattributed briefing doing the rounds of the European Parliament – take aim at these particular paragraphs.

All of the documents echo one another, making similar claims and observations in much the same language.

In a letter from February 20, NorthNorway – a group representing the regional governments of Norway’s northern provinces – describes the prospective Arctic oil ban as a “threat to the continued supply” of gas to Europe, observing that Norway has been extracting oil and gas from Arctic waters for decades.

Eirik Siversten MP failed to reply to our request for comment. 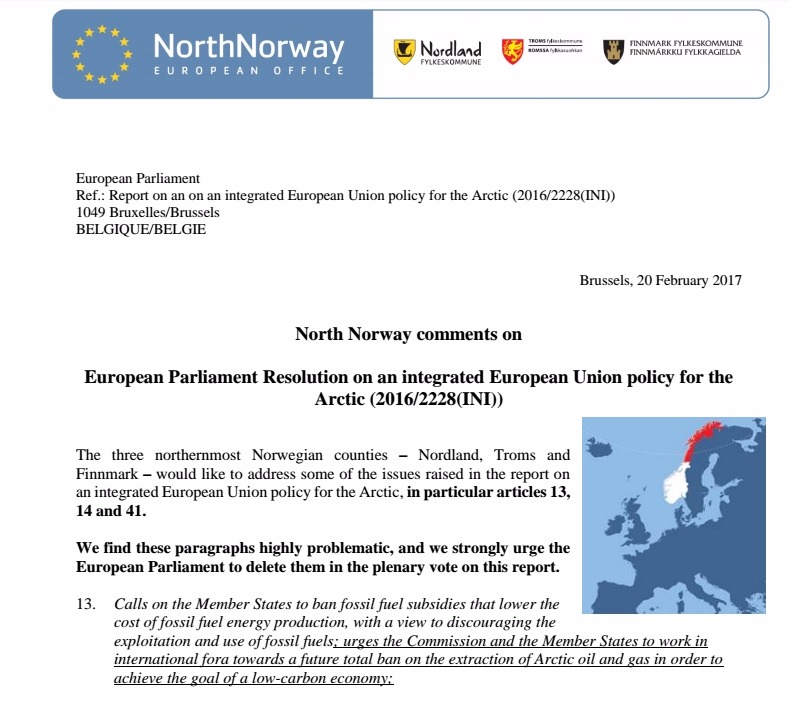 Last year the Norwegian government awarded 10 new licenses to drill in the Arctic waters of the Barents Sea, and this year two oil firms – Statoil and Lundin – plan on establishing up to 16 exploration wells.

This comes just months after former US President Barack Obama and his Canadian counterpart Justin Trudeau declared vast swathes of the Arctic off-limits for oil drilling.

The Russian Arctic is currently producing oil, some of which is being shipped to Europe through French firm Total.

Norwegian officials argue that oil development in the Barents Sea has been happening for decades, though not entirely without incident.

Italian oil company Eni’s flagship project in the region, for instance, has been beset with problems, including power outages, gas leaks and worker accidents, according to Bloomberg reports.

There’s also the fact that spill response in the harsh winter months is especially difficult, which Obama mentioned in his announcement late last year.

Some of the new drilling licenses cover areas of the floating marginal ice zone, a ‘particularly vulnerable area’ home to rich marine life.

And then there’s the climate.

Ban Ki-moon to @ArcticAssembly: Arctic is ground zero for climate change, we must turn words into deeds. https://t.co/IQNVX6rokT pic.twitter.com/QdmF1v1V6y

The goal of the Paris Agreement – to halt global warming at 1.5C – would likely require the rapid phase-out of all fossil fuels, including Arctic oil.

The Norwegian government, which was the first to ratify the agreement, is battling a lawsuit from NGOs for opening up the region for new drilling despite its recognition of the climate emergency and its constitutional duty to future generations.