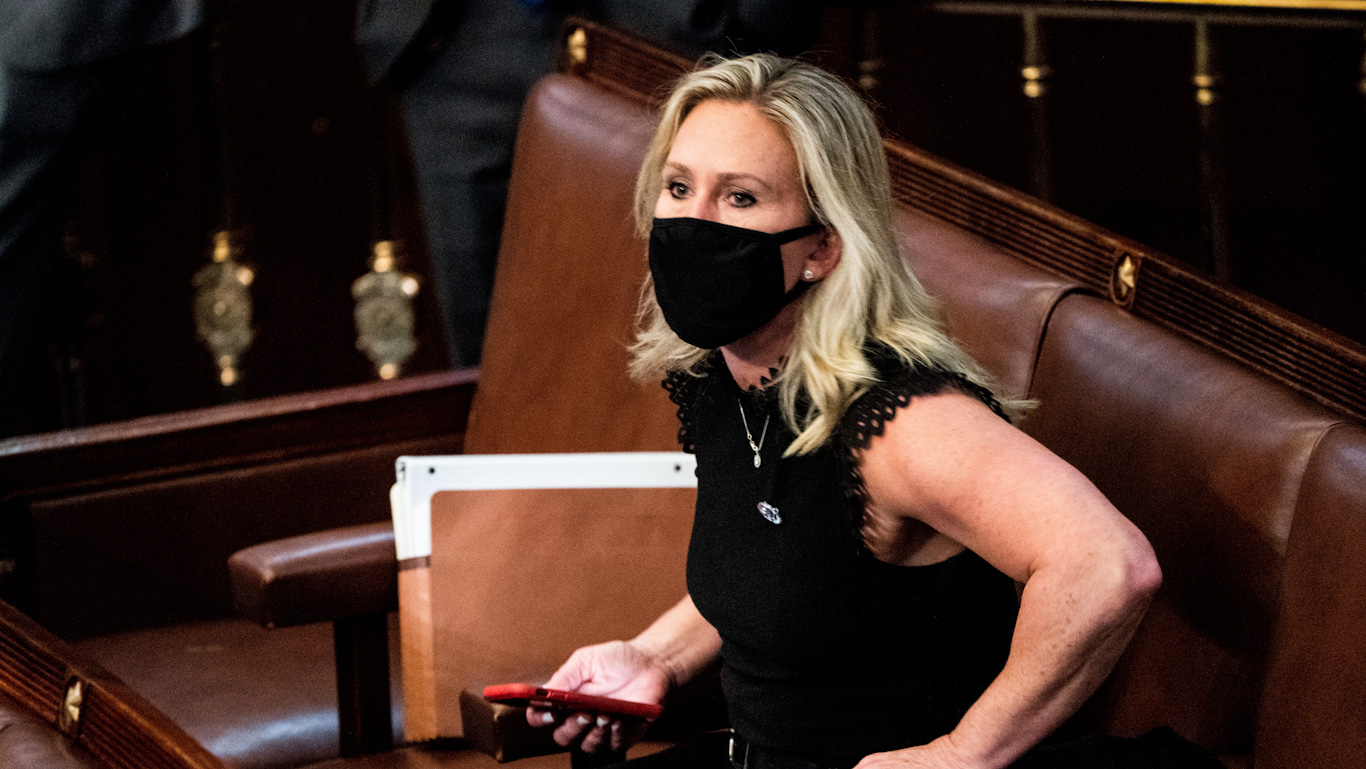 The House of Representatives has stripped new Georgia official Marjorie Taylor Greene from two committees over her history of promoting conspiracy theories. Congress took the highly unusual step today in voting 230 to 199 in favor of removing her from the education and budget committees, limiting her abilities and powers. In response, the 46-year-old freshman congresswoman described the Democrats as a “bunch of morons” and the new government as a “tyranny.”

Greene was a noted proponent of the QAnon conspiracy theory; a belief that Donald Trump was fighting a secret war on a group of satanist pedophiles and cannibals in control of the government. Believers thought that an anonymous user who went by the name of “Q” on messageboard 4chan (and on other forums later) was a high level individual in the Trump administration directing them towards the coming “storm,” where Trump would expose and destroy the cabal once and for all. The movement came to a head on January 6, when a crowd of Trump supporters, with many QAnon adherents among them, stormed the Capitol Building in what many have described as a botch coup d’etat.

Among Greene’s other notable beliefs were that no airplanes hit the Pentagon on 9/11, that the 2018 midterm elections ushered in “an Islamic invasion of our government,” that the 2018 California wildfires were caused by “Jewish space lasers” and that the 2012 Sandy Hook and 2018 Parkland school shootings were staged. In 2019, she even heckled a Parkland survivor, calling him a “coward.” Since gaining notoriety as a politician, however, she has walked back these beliefs, claiming she regrets once holding them.

Yet on the same day as the Democrats demoted Taylor Greene for her belief in baseless and dangerous conspiracy theories, the Senate Intelligence Committee announced that it will begin examining the influence that Russia and China had on promoting the events at the Capitol last month. The committee’s chair, Mark Warner (D—VA) said that it is vitally important to conduct a “significant dive” on the Kremlin’s ties to the groups who stormed the building and China’s “very, very sophisticated effort to influence American policy.”

“Amazing. On the same day Congress demotes a deranged QANon member, they elevate — and announce an investigation based on — the deranged Cold War fantasies of BlueAnon members,” reacted Aaron Maté, a journalist who has closely covered the RussiaGate story.

“A U.S. mob, borne out of homegrown dysfunctions and pathologies, attacked the U.S. Congress. The Congress’ top ‘intel’ panel responds not by solely focusing on this intel failure or these homegrown problems, but by searching for a way to blame Russia and China. Imperatives of Empire,” he added.

For four years, senior Democratic politicians and media figures have attempted to prove that Trump was in the control of Vladimir Putin, to no avail. The headline of the much-awaited Mueller Report concluded that there was no conspiracy, much to the disappointment of many in cable news who had been covering the supposed connections between the Kremlin and the Trump administration more than any other topic.

With QAnon, however, Democrats have already found their mid-term strategy, Politico reports. Instead of focusing on policy, they will attempt to paint the GOP as the party of far-right conspiracy theorists until at least 2022. On Tuesday, the party launched a new ad campaign doing just that. Speaker of the House Nancy Pelosi also sent out a press release referring to House Minority Leader Kevin McCarthy as “(Q—CA)” and not “(R—CA)” — an implication that the GOP is the party of QAnon.

There may be some truth to this. 30% of Republicans continue to hold a favorable view of QAnon, even after the events of January 6. Nationwide, 17% of Americans agreed that “A group of Satan-worshipping elites who run a child sex ring are trying to control our politics and media.” Only 47% of the country said that the statement was false. And although 11 Republicans joined the Democrats today in voting against her, according to The Hill, Greene received a standing ovation from her party colleagues on Wednesday, suggesting they are willing to forgive her previous statements. In retaliation, Republicans are busy attempting to remove Minnesota Congresswoman Ilhan Omar from her positions.

Despite the fact that QAnon is a baseless claim, it is not clear why it should be considered more untrue than the incorrect belief that Russia hacked American voting machines, swinging the vote for Donald Trump in 2016, as 43% of the country (and a majority of Democratic voters) believe.

Meanwhile, President Biden himself was one of the key players in spreading the false claim that Saddam Hussein possessed weapons of mass destruction, a centerpiece in the argument for a war in Iraq that has destroyed an entire region of the world. Ultimately, however, Biden’s false belief served the interests of Washington D.C. while Greene’s are an embarrassing distraction. While Democrats may find some political capital in ridiculing QAnon, they have their own history of making outlandish claims.