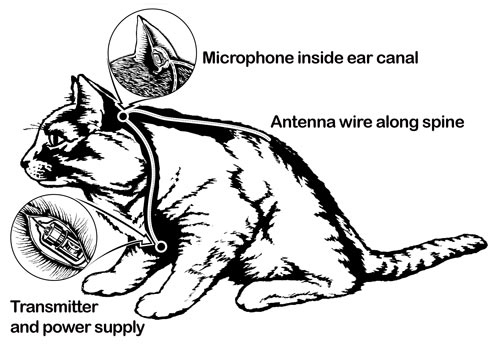 WASHINGTON, D.C.– While the CIA’s sordid history of human experimentation is well-documented, a declassified report – dating back to 1967 – sheds some light on the agency’s use of bizarre animal experimentation to expand its spying power.

In an experiment sure to outrage cat lovers everywhere, the CIA’s Directorate of Science and Technology was revealed to have physically maimed and filled a live cat with electronic spying equipment in an operation it dubbed “Acoustic Kitty.” Despite conducting just one experiment on a single cat, the experiment’s cost ran an estimated $15 million.

Victor Marchetti, who worked as special assistant to the director of Central Intelligence when the experiment was under way, recalled the absurdity and cruelty of the experiment in an interview with Telegraph:

“A lot of money was spent. They slit the cat open, put batteries in him, wired him up. The tail was used as an antenna. They made a monstrosity. They tested him and tested him. They found he would walk off the job when he got hungry, so they put another wire in to override that. Finally, they’re ready. They took it out to a park and pointed it at a park bench and said, ‘Listen to those two guys…’ They put him out of the van, and a taxi comes and runs him over. There they were, sitting in the van with all those dials, and the cat was dead!”

Other former CIA officials, such as academic researcher Jeffrey Richelson, expressed concerns about the cat’s quality of life and suggested that the test subject’s untimely end was for the best, commenting “I’m not sure for how long after the operation the cat would have survived even if it hadn’t been run over.”

The March 1967 report, titled “Views on Trained Cats [Redacted] for [Redacted] Use,” states that the purpose of the experiment was to attempt to train the modified cat to spy on the U.S.’ Cold War rivals. While the CIA hailed the experiment as a “remarkable scientific achievement,” they acknowledged that the “program would not lend itself in a practical sense to our highly specialized needs.”

While “Acoustic Kitty” quickly became a thing of the past after its inaugural failure, the U.S. government continues to use animal subjects for cruel and unnecessary tests that result in grave physical harm to living animals. One of the most famous of these practices is the U.S. military’s use of live animals for trauma medical training, which involves inflicting grave injuries on live animals so army medics can “practice.”

According to the U.S.-based non-profit Physician’s Committee for Responsible Medicine, “Every year, the U.S. military wounds and kills about 8,500 goats and pigs in combat trauma training courses, sometimes amputating their limbs, stabbing, and burning the animals.” However, the Pentagon has asserted that ending the use of live animals for battlefield medical training would put soldiers’ lives at risk.

Read the full declassified report “Views on Trained Cats [Redacted] for [Redacted] Use below: