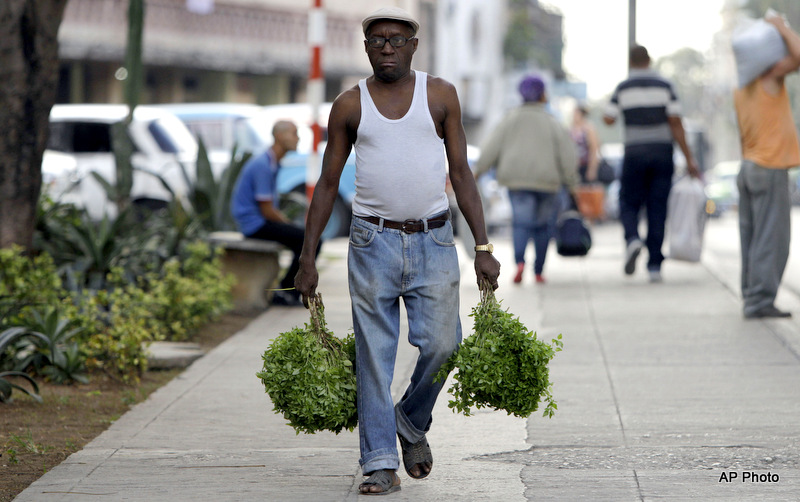 Death, Taxes And The Cuban Blockade

A man carries basil herbs as he walks in Havana, Cuba, The U.S. commercial, economic and financial embargo against Cuba lasted 23 years. The embargo was first enacted in 1960 following Cuba’s nationalization of properties belonging to U.S. citizens and corporations.

The famous expression about the only things that will happen with absolute certainty, death and taxes, is actually missing one: the annual vote in which 99% of the world’s nations declare that the blockade against Cuba is illegal and must end. Yesterday, for the 23rd straight year, the United Nations General Assembly voted to end the U.S. blockade against Cuba by the astounding margin of 188 to 2. The annual resolution may seem like mere political theater meant to embarrass the U.S. government, but in reality it is a sincere objection to an inhumane policy.

Washington will now ignore this resounding rejection, as it always does, and and go on breaking the law with impunity since there is nothing anyone can do to stop them. Don Corleone would be envious of their gall.

Since the last vote against the blockade, it was revealed that the top 10 recipients of U.S. aid all practice torture. During the last year, at least half of these allies have reportedly tortured people on a “massive scale.” This doesn’t even include the U.S.’s close ally Saudi Arabia, who in the last year has beheaded 59 people and sentenced a popular activist to death by crucifiction.

The lone supporter of the blockade, Israel, even tortures Palestinian children, who make up several hundred of the more than 5,000 prisoners held in military custody. All of Israel’s colonial subjects are subjected to “slow-motion genocide” and collective punishment.

Israel’s human rights violations drastically intensified this summer after they declared war on Hamas and carried out the slaughter of 2,150 Palestinians, including 578 children. Civilians accounted for at least 70% of all Palestinian deaths. Recently, the jury of the Russell Tribunal in Brussels found evidence of “war crimes, crimes against humanity, crimes of murder, extermination and persecution and also incitement to genocide.” Israel is the number one recipient of U.S. aid – receiving $3.1 billion per year from Uncle Sam to carry out its criminal atrocities, in violation of U.S. law and international law.

Torture does happen in Cuba as well – but only at the Guantánamo Bay detention center. U.S. military personnel there practice “torture and cruel, inhuman, and degrading treatment” of prisoners who are denied protections of the Geneva Conventions. It would hardly be fair to hold Cuba responsible for the war crimes of the U.S. military, which is illegally occupying the country.

Cuba is the only country the United States applies the Trading With the Enemy Act to because the blockade has never had anything to do with human rights. From the beginning, the blockade was instituted to cause “disenchantment and disaffection and hardship” in order to “bring about hunger, desperation and overthrow of government,” wrote former State Department official Lester Mallory. These savage measures were necessary, Mallory reasoned, because “the majority of the Cuban people support Castro. There is no effective political opposition.” [1]

The blockade against Cuba has been strengthened over the course of the last half century to include various extraterritorial provisions that violate the sovereignty of impartial countries. These include sections of the Torricelli Act that prohibit subsidiaries of U.S. companies in third countries from trading with Cuba. Ninety percent of such trade with Cuba consists of food and medicines. Additionally, the Helms-Burton Act prevents international financial institutions, such as the International Monetary Fund or the World Bank, from granting credit to Cuba. This violates the policies of these institutions as well as those of other international organizations. [2]

Many foreign companies have been caught in the U.S.’s illegal, extraterritorial web of laws in the past year. An Argentina-based travel agency settled for $2.8 million fine for offering services to people who traveled to Cuba. A large Dutch travel company settled for $5.9 million for similar charges. A Canadian subsidiary of the insurance giant AIG, which sold policies to people traveling to Cuba, was levied a $279,038 fine. Energy drink maker Red Bull was forced to pay a $90,000 fine for sending seven people to Cuba to make a documentary.

This year the blockade has cost Cuba an estimated $3.9 billion in foreign trade, which brings the inflation-adjusted total to $1.1 trillion lost since the blockade was implemented 55 years ago, according to the Cuban government.

It is civilians in Cuba, especially children, who are suffering the worst. Many antiviral medications are unavailable to minors because of the blockade. North American companies who make these medications don’t respond to requests for their purchase or claim they cannot sell them to Cuba, according to diplomat Jairo Rodríguez, who recently testified at the UN.

Nearly 80 percent of patents in the medical sector are held by American corporations and their subsidiaries. Cuba cannot gain access to these pharmaceutical medications and medical equipment because of restrictions imposed by the U.S. government. [3]

To purchase Braille machines, the Cuban Ministry of Education has to pay triple the price it would cost to purchase them from the United States, as they have to buy them from third countries for a much higher price, according to CubaInformación.tv.

The nickel industry in Cuba suffered more than $50 million in losses in the last year, according to Cuban officials. Not only are they deprived of a huge market close to their borders, forcing them to ship much farther away, but products made in foreign countries containing Cuban nickel are not allowed by the U.S. to be imported there. [4]

The U.S. denies Cuban baseball players visas to play in Major League Baseball if they reside in Cuba. Mexico, on behalf of the U.S. government, enforces the same policy for their professional league. If they want to play in the Major Leagues, Cuban athletes must seek refugee status in the U.S. and give up living in their native country. When they do, it is used as propaganda. The press declares a “wave of defections” while purposefully omitting the context.

The blockade is selectively enforced, allowing for a Cuban like Yoani Sánchez who parrots Washington’s ideological position to operate her 14ymedio.com Web site. Companies like Paypal, GoDaddy, IBM and Akami appear to violate the blockade by providing financial and technological support to a Cuban national, facilitating the subversion of Cuba’s socioeconomic system.

But when companies do business with Cuba without trying to destabilize the country, the U.S. government uses its full power to punish them. In June, the Justice Department levied the largest fine in the history of the blockade against French bank BNP Paribas, who paid $9 billion to settle criminal charges brought against them for transactions with Cuba and other countries. For comparison, there has not been a single criminal charge brought against an American bank for the subprime mortgage crisis that would have collapsed the entire financial system if the government had not stepped in with a taxpayer bailout.

The BNP Paribas case demonstrates how enforcement of the blockade has significantly increased under President Barack Obama. During the last 5 years, 130 extraterritorial actions were taken against Cuba resulting in $11.4 billion in fines. With the case against the huge French financial giant setting a precedent, the door is open to fines possibly even greater in the future.

French Economy Minister Arnaud Montebourg said in June “the U.S. has an unfair advantage in the global ‘economic war’ because of a law that authorizes prosecution of foreign companies for activities outside American soil. He called for fair and equitable treatment of the bank,” according to USA Today.

The French complaint is not a new one. It was pursued by European countries nearly two decades ago but never settled. In May 1996, the European Economic Community argued against the Helms-Burton Act in the World Trade Organization. President Bill Clinton, eager to pander to reactionary Anti-Castro voters in Florida and New Jersey, a strategic group important for his re-election, had signed the bill into law that year.
The European Committee “claim(ed) that U.S. trade restrictions on goods of Cuban origin, as well as the possible refusal of visas and the exclusion of non-U.S. nationals from U.S. territory, are inconsistent with the U.S. obligations under the WTO Agreement.”
The U.S. government took the illogical position that the Helms-Burton Act was a matter of “American national security,” of which the WTO “has no competence to proceed” and stated they would refuse to take part in the proceedings.
The U.S. didn’t end up invoking its national security exemption, which the European countries feared would wreak havoc on the whole international trade system, as negotiations continued. In the end, the European countries backed down and the WTO panel convened on the matter was suspended with the issue unresolved.
Salim Lamrani writes that French President Francois Hollande was mistaken to accept the argument that BNP Paribas had committed a crime even though no such crime exists in the French legal code.

“Instead of defending national sovereignty and condemning the extraterritorial and illegal application of American law against the fundamental interests of the nation, Paris limits itself to pleading for a less severe punishment,” Lamrani writes. “By folding so docilely to Washington’s orders, France renounces its independence and tarnishes its image on the international stage.”

It is not just the rest of the world that is against the blockade. A majority of Americans – even a majority of Cuban Americans – favor lifting the blockade and normalizing relations with Cuba. The U.S. government cannot even claim the political support of its own population to justify its policy.

With the human cost and the economic cost growing every day, there is a possibility that in the near future the unanimous opposition to the blockade will manifest itself in a stronger challenge than a non-binding measure without teeth. When the blockade is finally removed, many years later than it should have been, the expression can go back to being just “death and taxes.”

Matt Peppe writes about politics, U.S. foreign policy and Latin America on his blog. His writing has appeared in MintPress News, CounterPunch, Dissident Voice, Latino Rebels, and other outlets. You can follow him on twitter.

This Commentary was originally published on Just the Facts Blog.