The United States is Israel’s best friend and ally in the world. It contributes over $10 million a day in no-strings-attached military aid despite the fact that Israel’s human rights record, according to the State Department’s own admission, is deeply problematic and contravenes U.S. law. The U.S. has dropped out of or defunded a number of United Nations organizations, including the Human Rights Council, UNESCO, UNRWA, all for the sake of Israel.

Danny Danon – who once criticized Israeli Prime Minister Netanyahu, a hawk’s hawk, for his “leftist feebleness” – just completed a five-year stint as Israeli Ambassador to the United Nations, bringing his own political flourish to the job.

Back in 2015, when Danon was first appointed, Israel expert Jonathan Cook observed, “Danon’s posting is part of a discernible pattern of recent appointments by Netanyahu that reflect a growing refusal to engage in any kind of recognizable diplomacy. Confrontation is preferred. Danon can be expected to barrack, abuse and alienate fellow ambassadors at the UN in New York.”

Cook’s prediction was right on the money.

Before his UN appointment, Danon already showed great promise as a combative promoter of Israeli exceptionalism. That exceptionalism was on display in May 2010, when Israel killed nine Turkish citizens aboard a humanitarian aid ship en route to Gaza (a tenth victim later died). The ship, one of six in a flotilla, was in international waters when Israeli commandos attacked it in an attempt to prevent humanitarian goods from reaching Gaza. Turkey demanded that Israel apologize and a young Danny Danon, then a member of parliament, complied. “We are sorry that, due to the [Israel Defense Forces’] over-cautious behavior, only nine terrorists were killed,” said Danon.

In 2012, Danon served as chairman of Israel’s Deportation Now movement, an effort to remove tens of thousands of Eritrean and Sudanese refugees that had entered Israel in search of asylum. He declared at a rally,

The State of Israel is at war! An enemy state of infiltrators has been established within the State…We have to put an end to this, expel all the infiltrators before it is too late… The infiltrators are a national plague…” In June 2013, Danon advocated for Israel to annex parts of the West Bank with no regard for the indigenous Palestinians that live there (a plan that is taking shape today):

The Jewish people are not settlers in the West Bank, but Israel will make the Palestinians settlers and Jordan will be the one taking control over Palestinians and that’s it.”

That same month, he expressed indifference to both international law, in this case regarding illegal settlement building, and Israel’s reputation when he declared to the Times of Israel, that “[the] international community can say whatever they want, and we can do whatever we want.”

The next year, Danon landed a position in Prime Minister Benjamin Netanyahu’s cabinet as Deputy Defense Minister. He lasted just over a year before his brusque manner got him in trouble.

The Israeli Defense Force (IDF) was on its seventh day of an air invasion of Gaza. Its mission: to stop Hamas rocket fire (up to that point, projectiles from Gaza had caused 27 Israeli deaths in 13 years).

In its week-long air assault, the IDF had killed 185 Palestinians. No Israelis had been killed, and Israel had accepted a ceasefire. However, Danon criticized the Israeli government for going too easy on Hamas – especially for its delay in starting a ground offensive – and for buying into a ceasefire too soon.

We must not be humiliated. We must correct the mistake of the cabinet decision from this morning [to accept the ceasefire] and allow the army to do what it must… with Hamas we must speak in a language it understands.”

Danon released a statement that read in part, “I did not agree, and won’t agree, to this spirit of leftist feebleness by the prime minister, and I won’t sell out my ideology for an office and a driver.”

The ceasefire fell through, and two days later, Israel began a ground invasion of Gaza. By the end of the seven-week conflict, 2,251 Palestinians and 73 Israelis were dead.

Danny Danon was temporarily unemployed, but his career as a public servant was far from over: Netanyahu brought him back five months later as Minister of Science, Technology, and Space; the next year, he was appointed Ambassador to the United Nations.

In the UN, Ambassador Danon hit the ground running. In his first speech to the General Assembly, he attacked the entire body for what he considered an ongoing and utter mischaracterization of the Israel-Palestine situation:

Let me make one thing clear – this is not a cycle of violence. These are simply unprovoked attacks against Israelis for no reason other than the fact that they are Jews living in their historic homeland…”

The UN must end its usual practice of calling on both sides to show restraint, and state clearly: there is one side that is instigating a wave of terror.”

Stop making excuses for the Palestinians, and start holding them accountable.”

Danon: Shame on you for glorifying terrorism!

Mansour: Shame on you for killing Palestinian children!

Danon: I condemn all acts of terrorism’: one sentence you cannot say. Shame on you for that.

The next month, Danon played host to a conference called, “Building Bridges Not Boycotts,” in the United Nations headquarters. The summit sought to counter recent bad press: the UN Human Rights Council (UNHRC) had mandated a database, which was finally published in February of this year, of companies doing business in illegal Israeli settlements. The list could be used to boycott the companies, most of them Israeli, as a form of economic pressure to stop the construction of illegal settlements. Danon displays what he called a Palestinian “terror doll” during a 2016 press conference at the UN. Cara Anna | AP

The Boycott, Divest, and Sanction (BDS) movement – a campaign that addresses Israel’s violations of international law in its treatment of the Palestinian. The nonviolent campaign is modeled after the South African anti-apartheid movement. Israel and the U.S. describe BDS as anti-Semitic and an attempt to delegitimize Israel.

During the conference, Ambassador Danon declared to his audience,

[BDS] has already infected the UN. When the UN opens its doors to BDS, we have to respond. This is a battle we must fight, and it is a battle we will win.

To those who boycott Israel, who want to see an end to the Jewish state; to those standing outside the UN right now screaming hateful anti-Semitic slogans against Israel: you will never win.

Our people have overcome every enemy. We stand strong; we stand together; and we  will defeat you, once and for all.”

In October 2018, the UNSC had a guest, one Hagai El-Ad, Director-General of B’tselem, a highly respected Israeli human rights organization. B’tselem’s goal is to document human rights violations in the Israeli-occupied territories. As part of a debate on Israel’s treatment of Palestinian Bedouins, El-Ad reported on his findings, describing Israel as a state “founded on supremacy and oppression.” Ambassador Danon retorted,

You’re a wretched collaborator…IDF soldiers guard you, and you came here to defame them. Shame on you.”

In November 2018, Israel clearly undermined a ceasefire with Hamas by infiltrating Gaza. The incident ended with seven Palestinians and one Israeli soldier dead. Hamas retaliated by firing rockets toward Israel, killing one; Israel then killed seven more Palestinians.

The UN Security Council met to discuss the situation, but could not agree on a response.

Some UNSC members blamed Israel for the flare-up – Danon accused them of being “morally bankrupt”; others diplomatically called for restraint on both sides, to which Danon proclaimed, “there is no such thing as both sides.”

In April 2019, Ambassador Danon – himself a secular Jew – waved a Bible in the air and declared, “This is the deed to our land.”

From the book of Genesis; to the Jewish exodus from Egypt; to receiving the Torah on Mount Sinai; to the gates of Canaan; and to the realization of God’s covenant in the Holy Land of Israel; the Bible paints a consistent picture. The entire history of our people, and our connection to Eretz Yisrael, begins right here…” 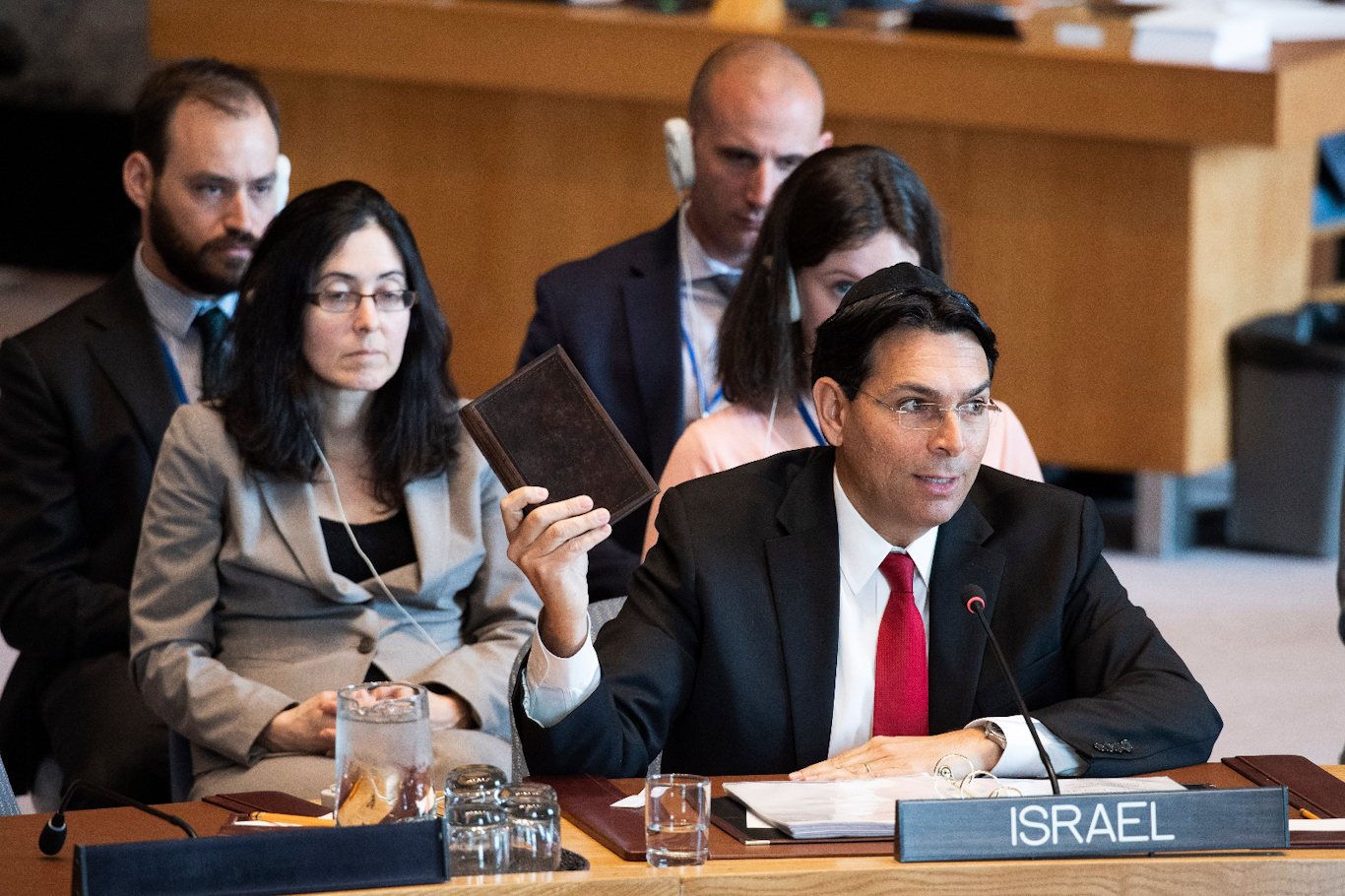 In June, Danon published an editorial in the New York Times, “What’s wrong with Palestinian surrender?” In it, he criticized the Palestinians’ rejection of Trump’s so-called Deal of the Century – a “peace” plan that eliminates all hope of justice and self-determination and acquiesces to Israeli colonization. Danon concluded that Palestinian resistance,

[exposes] the uncomfortable truth about the Palestinian national identity: It is motivated not by building a better life for its people but by destroying Israel.”

In December, in what turned out to be one of his final acts of “diplomacy,” Danon announced that he’d be introducing a resolution in 2020 – one that would recognize the Jewish refugees circa 1948. He was referring to the estimated 850,000 Jews who had been exiled from Arab countries and Iran around the time that Israel was created, forced out by the Muslim majorities in those countries, angry that Jews had colonized the homeland of the Palestinians. Danon insisted, “Every time the U.N. talks about the refugees of Israel’s war of independence, they speak only of the Palestinian refugees.

The fact is there were two populations of refugees, and we must not allow that fact to be forgotten. Not only because we must honor those who lived through it, but because we must learn from it.”

He said he hoped to pass a resolution to formally recognize these refugees:

Israel took in these refugees and integrated them into our society. The international community on the other hand ignored them and built corrupt institutions that only serve so-called Palestinian refugees.”

But the State of Israel will give voice to the truth and correct the historical injustice by putting an end to the deafening silence on the part of the international community.”

Ambassador Danon’s resolution recognizing Jewish refugees never materialized. He did leave a parting gift, though: an interview with BBC’s Stephen Sackur, riddled with problematic and controversial statements: “I represent not only the people of Israel, I represented [sic] the Jewish people in the U.N.”

We [Jews] do have biblical rights to the land. Whether you are Christian, Muslim, or Jew — you read the Bible, you read the stories of the Bible — it’s all there.

This is our deed to the land. That’s biblical.”

When asked about Israel’s plan to begin formally annexing parts of the West Bank, Danon replied, “You cannot annex something that belongs to you. When you annex something you do it from a foreign territory. I do not know from whom we are annexing it…”

Danny Danon’s confrontational style of “diplomacy” grew from his belief that the United Nations carries a grudge against him and all Jews. In fact, the UN created Israel, and in return, Israel made promises – none of which it has kept. In 2015, Jonathan Cook noted, “Danon’s appointment…indicates the extent to which the Israeli right has abandoned any hope of persuading the international community of the rightness of its cause – or even of working within the rules of statecraft.”

Based on that job description, Mr. Danon certainly discharged his duties.