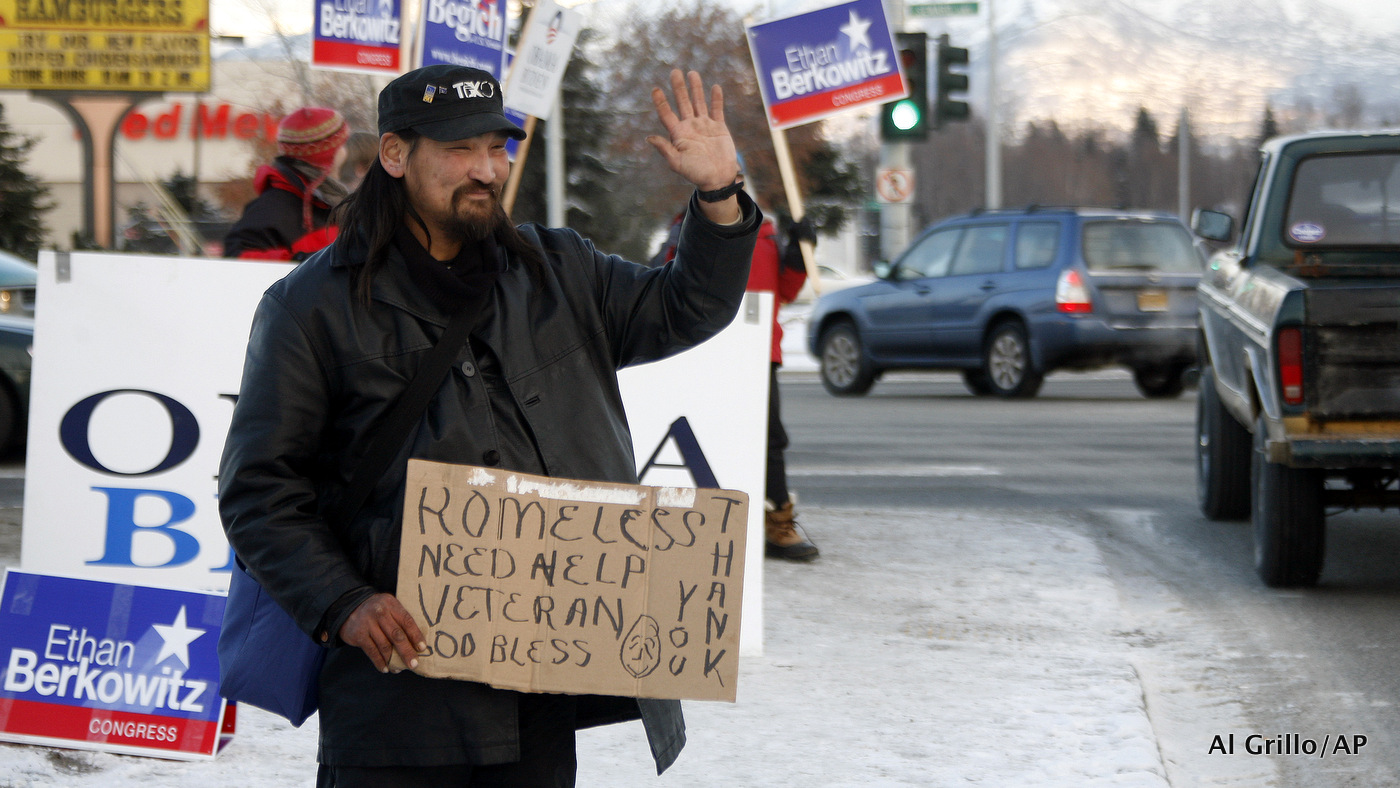 WASHINGTON — Like many U.S. military veterans, American Indian and Alaska Natives struggle with homelessness and a lack of support services following their time in the military — especially if they were hoping to settle down on tribal lands.

On Jan. 30, however, the U.S. Department of Housing and Urban Development (HUD) announced that American Indian and Alaska Native veterans will, for the first time, be eligible to apply for rental assistance vouchers available under the HUD-Veterans Affairs (VA) Supportive Housing Program (HUD-VASH).

Noting that “care and support” for veterans is a national responsibility, HUD Secretary Julián Castro said in a press release, “[F]or too long, fulfilling that responsibility to many Native American veterans has been borne by Indian Country alone. We’re changing that this year.”

The HUD-VASH program has made great progress so far in reducing homelessness among veterans, including some of the country’s estimated 153,000 Native American and Alaska Native veterans, and offering support services and case management through the VA. Since 2008, the program has served over 82,000 veterans, but until recently, it has been closed to tribal housing authorities.

“It’s simply not right that Native veterans, who are at greater risk for homeless[ness] than any of their peers, can’t access these needed funds,” Tester said. “Native Americans serve in the Armed Forces at a higher rate than any other group and yet many live homeless on tribal lands. They deserve better, and this bill will help them get back on their feet.”

“Because of the Native American Housing and Self-Determination Act (NAHASDA) block grants, there were legal prohibitions to utilizing HUD-VASH vouchers on tribal lands that could not be overcome without the legislative language to authorize it,” Meagan Lutz, a public affairs specialist for the VA, told MintPress News.

NAHASDA, which went into effect on Sept. 1, 1997, prevents Section 8 affordable housing vouchers from being available for housing on tribal land, where most housing is federally subsidized.

HUD-VASH and NAHASDA both require participants to pay only 30 percent of their income toward housing, but they accomplish this in notably different ways. The voucher program provides the difference between the 30 percent the individual family pays and the rest of the fair market rent charged by the landlord. Under the NAHASDA block grant program, the total rent that can be charged is 30 percent of the individual family’s income. There are no fair market rents associated with it.

Ken Kuntz, a spokesman for Sen. Tester, told MintPress that the legislation proposed by Tester was needed because while individuals may access the HUD-VASH program through public housing, tribally designated housing authorities cannot access funds due to program rules.

“It allows access for tribal housing authorities that were previously excluded from the program,” Kuntz said.

“In some tribal communities, one out of every 200 adults has served in the military,” Kuntz said. “American Indian and Alaska Native people serve at a higher rate than any other group – almost two times what would be expected based on the population size.”

Nearly 60 percent of American Indian and Alaska Native veterans are unemployed, compared to 55 percent of the general veteran population, he said, adding that this group also has a higher percentage of disability. About 2,000 veterans served by VA homeless programs live on tribal lands.

To address those discrepancies, the VA is working to forge new partnerships that yield more affordable housing units to be set aside for veterans and more meaningful jobs for veterans.

The VA reports that Opening Doors has driven down rates of homelessness among veterans by 33 percent from 2010 to 2014. The VA credits partnerships with federal, state and local agencies with expanded services and support to intercede for veterans in housing, clinical care and social services, Lutz said.

In fiscal year 2014 the VA provided services to more than 260,000 homeless or at-risk veterans through the Veteran Health Administration’s homeless programs. Of these, more than 53,000 veterans were placed in permanent housing or prevented from becoming homeless. This marked a substantial rise from 2011, when 18,591 veterans obtained permanent housing through VA programs.

Likewise, the 2014 Point-in-Time (PIT) count revealed that there were about 49,933 homeless veterans on a single night in January 2014 in the United States, representing a 33 percent drop from 2010. The national Point in Time count of homeless individuals, both sheltered and unsheltered, is conducted annually by the Continuums of Care volunteers, using formats and methodologies provided by HUD, which also collects and analyzes the data.

Alaska is home to between 74,000 and 77,000 homeless veterans and has the highest rate of veteran suicide per capita, according to information from the Anchorage-based Alaska Veterans Foundation.

“Some argue that homelessness is a choice,” said Ric Davidge, chairman of the Alaska Veterans Foundation. “Not in Alaska. Here it is often a death sentence. We have seen a number of homeless veterans die on the streets of Anchorage in the past few years. That’s why we are so focused and motivated on this project.”

Alaska Veterans Foundation, a 501(c)(3) nonprofit organization, was established in 2004 to assist the Alaska State Legislature in addressing the needs of veterans, especially housing needs. In 2013, the foundation received a $300,000 grant from the state to conduct pre-development activities in support of its VetVillageAK housing project under the leadership of the Alaska Veterans Foundation and Vietnam Veterans of America in Alaska.

The state’s unique geographic and weather conditions dictate that any program needs to be tailored to Alaska to succeed. A HUD program designed to be implemented in California, for example, simply won’t work in the Arctic.

“Why can’t we design a program for the Arctic?” he said. “The same question was asked by the government 32 years ago. But there’s been no advance.”

The foundation is going to the state Legislature this month with a request for $4 million in funding for the first phase of a project that is designed to be self-sufficient in 18 months.

“My idea is not only to have a place everyone is comfortable, away from the downtown Fourth Avenue drug and drinking culture, transitioning new veterans who often face difficult cultural choices upon separation from service,” Davidge told MintPress.

A homeless adult lives about 10 years, he said, costing taxpayers more than $1 million in shelters, jails, detox centers, transportation and other services.

“That million dollars is not doing enough,” he said. “Every October there’s a wave of homeless that comes into Anchorage for the winter to look for shelters where they can spend the winter. They often get infected by the drugs and alcohol. There are 47 entities who make a living off the homeless, but do they improve their lives? Only a handful are effective.”

In Alaska the predominant Native cultures are Inupiat (Eskimo) and Athabaskan, as well as the Tlingit, Haida and Aleut people in the southeastern part of the state. There are 52 Native villages, many not accessible by road, and Davidge has visited every one.

While Alaska Natives see being a veteran as a cultural honor, Davidge said, it can be difficult for these veterans to return to village life.

“They may sign up at the age of 18,” Davidge said. “A young man who has never left the village in his entire life goes off to Kuwait or Afghanistan. For the first time in his life he’s living in a white social construction. He’s unfamiliar with daily life, never experienced that. Then, if he goes home, he finds no way to make a living other than subsistence fishing. He is culturally torn. It’s a deep pain in the heart. He comes to Anchorage where he can be anonymous.”

A lifestyle of migrating with the caribou changed in the 1960s, when programs like Medicare and Medicaid and the Food Stamp Act of 1965 were introduced and recipients had to establish physical addresses.

“All that migrating stopped and they’re trying to find ways for a new economy,” Davidge said. “Those along the coastal areas depend on fishing but the state limits permits. There’s a subsistence lifestyle but they can’t support themselves as commercial fishermen because of the limits imposed by the state. On the north slope villages get payments from oil and gas companies but there’s social conflict between remaining traditional or working in an office.”

The planned VetVillageAK involves a 20-year lease of about 34 acres in Anchorage. It qualifies for 50 HUD-VASH vouchers in its first phase.

Davidge said the project will provide a warm, safe environment to homeless and at-risk veterans, who will also have access to support and other services to contribute to their physical and emotional well-being.

“All they have to do is say yes and sign a tenant agreement,” he said. “In about 30 days they normally stabilize both mentally and physically. Their consumption of alcohol generally drops by 30 percent or more and they begin to think a little clearer and with trained help begin to make constructive choices about their future.”

Once they are stable and their medical issues have been identified and attended to, then they’ll have the option of moving out of the two-story living facility and into a cabin.

“If not ready they can stay in this facility until they are,” Davidge said.

The plan includes 25 cabins in the first phase that will function as long-term supportive housing, where veterans and their families can stay for as long as they want. Davidge said this is an essential and critical need in Alaska that the VA has been reporting to Congress for decades.

Similar veteran community housing projects can already be found in San Diego, Las Vegas, and Haines, Alaska, among others, and others are currently in development, usually in concert with the VA, HUD and human service providers. Some provide housing with services elderly veterans, while others serve veterans who need support in addressing homelessness or behavioral issues including PTSD.

“At VetVillageAK all must work, go to school or attend a trade school,” Davidge said. “They must get up every morning and contribute to the village. Without work there is no real recovery or future.”

Davidge said the initiative is partnering with Labor Ready, Inc., a national day labor business, which often has more jobs than workers.

He also noted that “Native issues are a serious challenge,” and the project will include transitional housing for Alaska Native veterans who don’t want to return to their villages.

“This is a very sensitive issue,” Davidge said, “as those who choose not to return to their village are often called traitors by their families there. But we believe every human being has the inalienable right to choose their own life.”