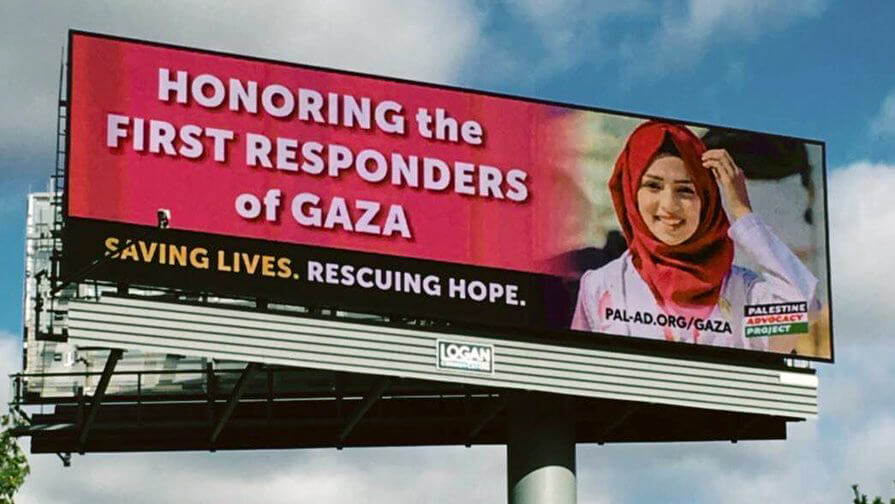 Nearly 3 weeks into its planned 4-week run, an electronic billboard honoring first responders in the Gaza Strip was pulled on November 13th when the billboard company received phone calls and email complaints labeling their staff as terrorists and anti-Semites and threatening a boycott.

The Palestine Advocacy Project sponsored the billboard on Interstate 93, near Boston, Massachusetts, USA, to highlight the desperate situation in the Gaza Strip, and to emphasize the humanity and agency of the people of Gaza, who are often portrayed as terrorists or victims.

The billboard included a photo of deceased Palestinian medic Razan al-Najjar, and text reading: “Honoring the First Responders of Gaza. Saving Lives. Rescuing Hope.” It was estimated to be viewed by over a half million motorists each week of its planned 4-week run, beginning 24 October. The billboard was met with positive media coverage.

This week, a coordinated, aggressive campaign was launched against the billboard company with accusations of anti-Semitism, intended to damage the company for hosting this billboard. Sarah Gold, a volunteer with the Palestine Advocacy Project, said:

This campaign is neither engaging us nor our perspective. Instead, it is attempting through intimidation to eradicate the avenues of free speech we have endeavored to use; to silence us.”

A billboard honoring Palestinian nurse Razan Najjar is seen in Boston, Massachusetts. Razan was wearing a medic vest when she was shot and killed by Israeli snipers while attempting to treat injured protesters in occupied Gaza. [Photo by Palestine Advocacy Project]. pic.twitter.com/TBngDFCFW8

The billboard is another casualty in an ongoing attack on free speech. Palestine Legal states in their 2017 report, “The Israeli state and its proxy organizations in the U.S. are investing heavily in punitive measures to intimidate and chill the free speech of those who wish to express criticism of Israeli policies.” The report documents 308 attacks on U.S.-based Palestine-related free speech in 2017 alone, according to the PNN.

Razan al-Najjar and other Gazan first responders were doing their best to attend to wounded civilians; yet celebrating them is construed as an act of “hate & anti-Semitism.” One complaint reads in part: “A billboard glorifying those who try to kill and destroy our People and Homeland! Anti Semitism is as old as time itself, Hate of Israel is hate of Jews, completely unacceptable!” This negative campaign appears to be based on the erroneous notions that all Gazans are anti-Semites intent on murdering Jews, that Gazans are not entitled to basic human rights, and that any display of solidarity with them equates to a call for the destruction of Israel.

The billboard was extremely positive and does not even mention Israel. Instead it was a celebration of Palestinian heroes. Apparently, there cannot be Palestinian heroes without some advocates of Israel feeling attacked.”

Top Photo | A billboard in Boston shows Razan al-Najjar, a Palestinian volunteer paramedic who was killed in Gaza by an Israeli sniper while treating patients during a demonstration. Photo | Palestine Advocacy Project