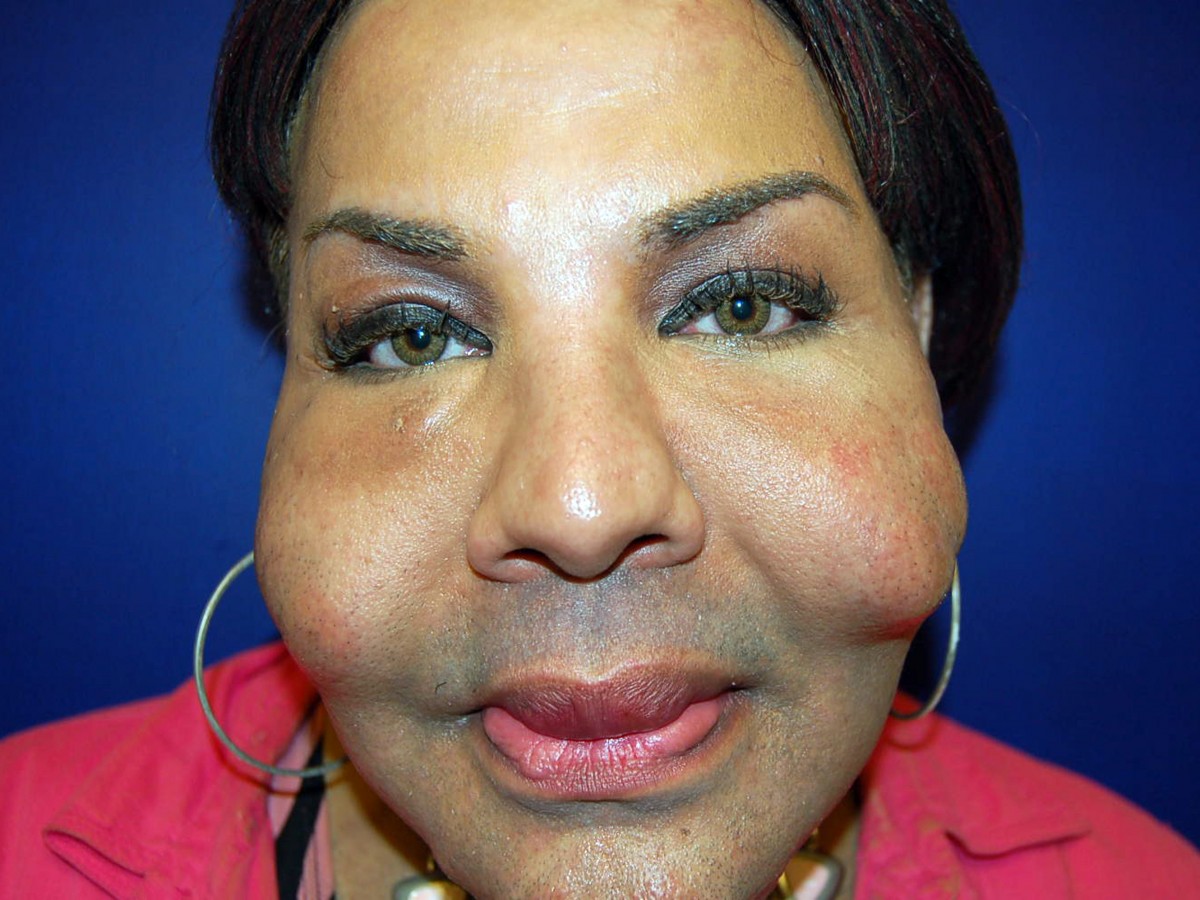 Black-Market Plastic Surgery: Killing And Disfiguring Women In The US

Many women in the U.S. are increasingly turning to the black market to alter their appearance.

Seeking fuller lips, a larger derriere and bigger breasts, but unable to afford expensive plastic surgery procedures, many women in the U.S. are increasingly turning to the black market to alter their appearance.

With the use of tools such as industrial silicone, which is only available at home improvement stores, many women in several states have died after people without medical training injected their buttocks with the silicone. Of those who survive the procedure, many are left with disfigured appearances and serious medical issues.

Dionne Stephens is an assistant professor of psychology at Florida International University who studies race, gender and sexuality in hip-hop culture. She says that the popularity of celebrities such as Jennifer Lopez, Beyonce and Kim Kardashian, who all have curvy bodies and larger rear-ends, have led to an increase in the number of women in the U.S. who also want a bigger butt.

According to the American Society of Plastic Surgeons, doctors performed more than 3,700 legal enhancement procedures last year, which generated more than $17 million in revenue, as the average fee for a legal butt implant operation is around $4,670.

Although legitimate plastic surgeons perform buttocks injections using a patients’ own fat cells, as well as performing lifts and implant operations, doctors do not inject silicone, as the material was never intended to be directly injected into the body. Even silicone used for implants is contained in an implant sack.

Stephens says the problem is when black market procedures are the only plastic surgery a person can afford, many decide to risk their health in hopes they will end up with the body of their dreams.

Since the black market surgeries are not legal, the exact number of people in the U.S. who have undergone the illegal operations is unknown. In Internet forums, several thousand people have discussed getting the operations. However, many of these forum discussions have changed in recent years to discuss the dangers of the operations as the danger has been discovered. Those women who still want the procedures usually find someone via word-of-mouth.

Success stories of black market plastic surgery procedures are rare, but as more and more people turn to them, doctors say they are seeing more and more cases where these procedures have led to serious medical conditions, such as staph infections, or even death.

Dr. John Martin is a plastic surgeon in Coral Gables, Fla. He said that while cosmetic procedures have become more common in recent years, with people sometimes hosting “pumping parties” in hotel rooms, the materials can cause infections and blood clots. Martin added that if the needles hit a blood vessel, the silicone can enter the bloodstream and work its way into the lungs.

California resident Apryl Michelle Brown, 46, says she was teased about her “pancake butt” ever since she was a child. So when a woman walked into her beauty salon and promised Brown that she could make her butt bigger with injections, she thought it was “divine intervention.”

“It was just something I felt inside of me, that I felt would make me better. I just didn’t want the pancake booty anymore,” she said.

Brown went to the woman’s home the next week and began getting injections. She went back the following week for more injections, but soon discovered the injection sites were hard and very painful, and found herself looking for doctors to remove the industrial silicone from her butt.

In 2011, Brown developed a staph infection after having a surgery to remove the silicone. She almost died and had to have both of her hands and feet amputated. She now has a website and speaks to women about appreciating their natural beauty.

“I would never want anybody else to go through this, not even lose one finger, much less all their limbs,” she said.

On March 17, 2012, Florida resident Shatarka Nuby died from acute and chronic respiratory failure from the illegal silicone injections she received in her butt from 2007 to 2011. Each injection operation cost Nuby $2,000.

When she died, Nuby was in prison serving time for using fraudulent credit cards to obtain plastic surgery operations.

Oneal Ron Morris, a woman who goes by the name Duchess, was charged with manslaughter after Nuby’s aunt told investigators she watched Morris perform some of the injections, which Morris promised Nuby would not hurt her.

Nuby’s aunt said that Morris told her that she was using silicone from Home Depot and the aunt said she could “see the butt rise” when the injections were done and said the sites were sealed with cotton balls and Super Glue.

Since the case has been publicized, at least 30 other women have come forward saying that they, too, obtained illegal plastic surgeries from Duchess and are now disfigured.

Miami resident Shaquanda Brown told the Daily Mail in 2012 that she paid $700 for a series of 12 injections in her butt. Brown reported that she laid on a massage table while Morris did the injections. She said she saw a tube of Super Glue, a black hose and a syringe, but Morris told her to lay face down on the table.

Brown said Morris would squeeze Super Glue onto gauze and place tape on the site of each injection, but she had to stop because it was so painful.

Shortly after receiving the injections, Brown was admitted to a hospital where she had to stay for over a month while she was treated for multiple abscesses and a staph infection.

A similar case happened in Mississippi in 2012, when a Georgia woman identified by the name of Gordon died of blood clots in her lungs a few days after receiving buttock injections. According to testimony from an investigator, there was so much of a silicone-like substance in her body that when the medical examiner cut into her during the autopsy, the material spilled onto the floor and “all over the place.”

Two individuals have been charged with depraved-heart murder for her death, and are expected to go on trial next year.