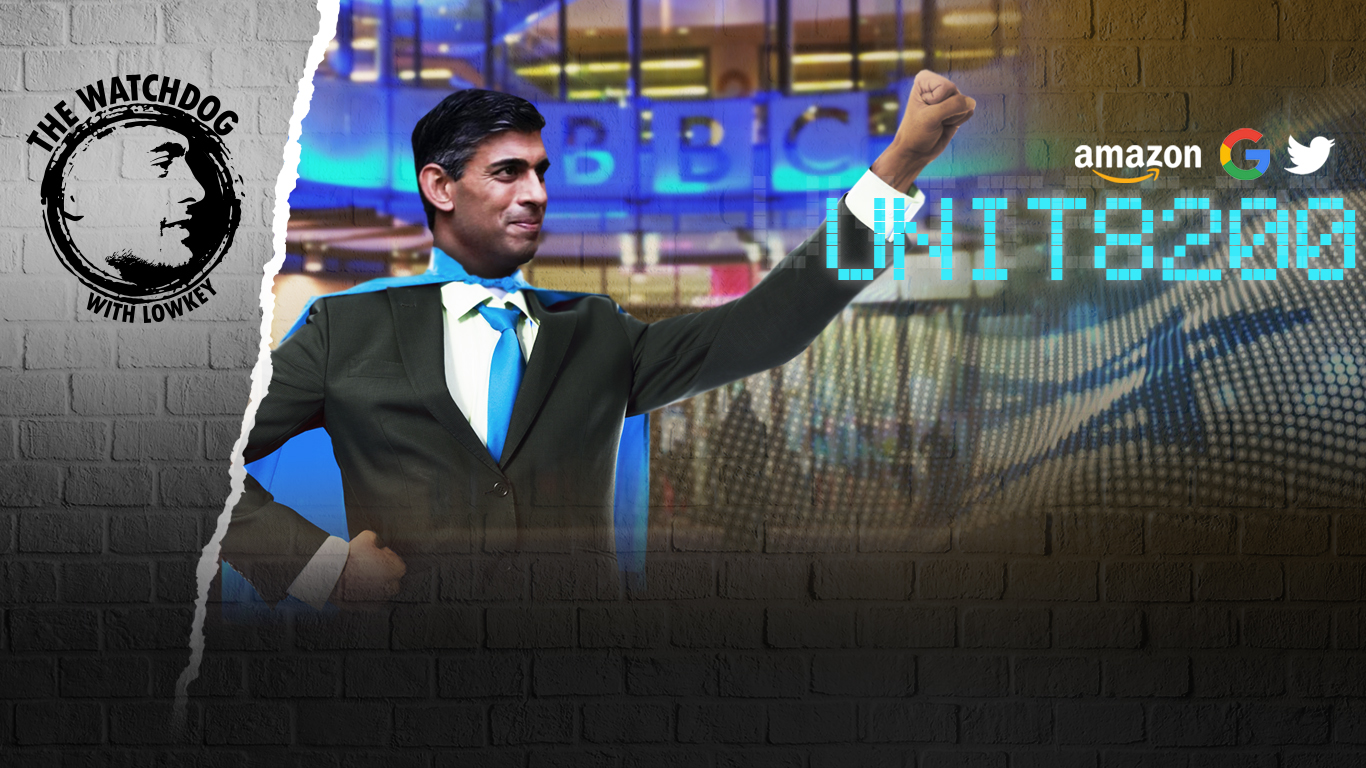 
.
The MintPress podcast, “The Watchdog,” hosted by British-Iraqi hip hop artist Lowkey, closely examines organizations about which it is in the public interest to know – including intelligence, lobby and special interest groups influencing policies that infringe on free speech and target dissent. The Watchdog goes against the grain by casting a light on stories largely ignored by the mainstream, corporate media.

Rishi Sunak is Britain’s new prime minister. Sunak was not elected, even by Conservative Party members, who, just weeks earlier, had chosen Liz Truss. However, she was immediately turned upon by senior party members.

Sunak is the darling of the establishment, chief amongst it the British state broadcaster, the BBC. In 2020, the BBC presented him as a literal superhero, describing him as the chancellor who would “save the country’s economy.” In reality, government incompetence over COVID, Brexit and sanctioning Russia wrecked the economy, leading to rampant inflation and a pressing cost of living crisis affecting all Britons.

For this latest episode of “The Watchdog”, Lowkey again talks to Alan MacLeod, this time about the BBC’s extremely close links to the ruling Conservative Party. While often criticized by right-wingers as a bastion of liberalism, a multitude of top BBC executives and directors are directly linked to Toryism. For example, BBC chairman Richard Sharp was a senior adviser to many top Tories, including both former prime minister Boris Johnson and Sunak himself. Sharp has also donated at least £400,000 to the party.

Meanwhile, as MacLeod noted, the BBC’s former head of political programming, Robbie Gibb – the brother of a Tory cabinet minister – left the broadcasting corporation to become the director of communications for Conservative prime minister Theresa May.

Alan MacLeod is Senior Staff Writer and Podcast Producer for MintPress News. He has worked at the company since 2019. Before joining MintPress, he was an academic and a freelance journalist specializing in Latin America and in analyzing media and propaganda. His latest article, “The BBC-to-NATO Pipeline: How the British State Broadcaster Serves the Powerful,” explores how the United Kingdom’s state broadcaster is nowhere near as independent as it insists it is.

In the second half of the podcast, the pair discuss MacLeod’s latest findings on Israeli military surveillance organization Unit 8200. In a new investigation, MacLeod found that hundreds of former Unit 8200 agents have been appointed to influential positions in some of the biggest and most influential Silicon Valley tech and communications companies. This includes Google, Amazon, Twitter and Microsoft. There, they oversee much of these companies’ development and security.


This is an alarming finding because, as is well-documented, Unit 8200 has carried out massive spying operations on Palestinian citizens, compiling sensitive information such as medical records and sexual histories, and used it to blackmail and extort them. Its graduates are also responsible for designing many of the most controversial and invasive hacking tools ever created, including the infamous Pegasus spyware that was used to eavesdrop on tens of thousands of politicians, journalists and activists across the world.

Watch or listen to this interview exclusively at MintPress.