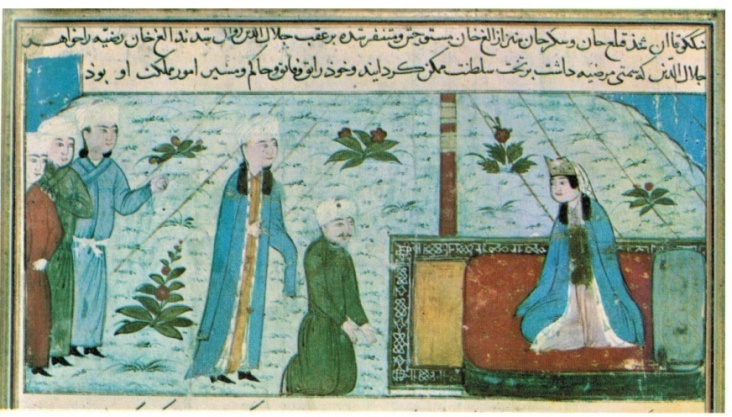 Raziyye Hatun is a mostly forgotten female ruler in the Muslim Turkish State of Delhi.

The city was conquered in 1188-9 by Emir Kutbüddin Aybek, who was a slave of Shahabüddin Mehmed bin Sâm, the ruler of Gûr. Following the death of Shahabüddin Mehmed (Muizzüddîn Mehmed) in 1205-6, Aybek formally proclaimed the independence of Delhi and gave the name of Muizziyye to the dynasty he founded. After his death, he was followed by his son Aram Shah.

However, he was not to rule for long. That same year he was forced to give up the throne and was executed. Iltutmush “Shems üd-Dünya v’ed-Dîn,” who was Kutbüddîn Aybek’s slave and son-in-law, seized the throne and took the title of sovereign and became very powerful. His dynasty was given the name of “Shemsiyye.” He was a just ruler and chose his daughter Raziyye Hatun as heir to the throne. Sultan Raziyye was the only female Muslim ruler who, of the three possible means of succession to the throne, was chosen by “Ahid,” that is to say was appointed by the ruling monarch to succeed him.

While this decree was being prepared, some of the influential statesmen who were in contact with the sultan asked him why, when he had sons who were of age, he had chosen to make his daughter Raziyye heir to the Moslem Sultanate of India. Sultan Iltutmush replied that his sons were given to passing their time in drinking and youthful entertainment, that not one of them was capable of managing the country’s affairs without becoming more mature. When Raziyye was sovereign, they would realize what a fortunate choice her appointment as heir had been.

In this decision we see the importance of virtue and morality in the choice of a sovereign who is not chosen because of its gender, but because of its competence. Raziyye possessed all the qualities necessary for a king, to a greater degree than most men and, just as she was an accomplished warrior, so she loved and protected men of learning. She was, in short, a courageous and good-natured woman.

When Iltutmush died, his commanders were divided into two groups. Of these two groups, one wished to bring the heir apparent Raziyye to the throne. The other claimed that when Iltutmush, who was very ill at the time, returned from his last Punjab campaign the fact that he brought with him to Delhi his son Rüknüddîn Firûz Shah, who was the governor of Lahore, indicated that he wished Rüknüddîn to be recognized as Sultan in place of Raziyye. Helped by the efforts of his mother Shah Türkân, Rüknüddîn Firûz Shah was brought to the throne.

As we will see in many biographies of female rulers in Islam, there were always people opposing their rule because of many reasons. But because of Rüknüddîn was a drinker, Raziyye was able to get the entire rule of the country. After many struggles and intrigues, the elite of the army took an oath of allegiance to Raziyye and set her on the throne. She ordered Rüknüddîn capture; he died during his imprisonment in 1236. This shows how history’s women used Realpolitik-strategies: when unable to assume the throne by being chosen, they take their right by force.

The main reasons for the fall of Rüknüddîn, whose reign lasted only six months and 28 days, were his lack of interest in state affairs, his weakness for musicians and actors and the favouritism he showed them. Again we see that in Islam governing depends on competence and not on gender.

In historical sources, Raziyye is described as generous ruler who made reforms in the administration of justice. She also fought the Nur Karmatids and a rebellion instigated by opportunists. Nizam ül-Mülk Jüneydî, a minister of the state, joined with Melik Alâüddîn Jânî, Melik Seyfüddîn Kujî, Melik İzzüddîn Kebir Han Ayaz, and Melik İzzüddîn Mehmed Sâlârî who, like himself, were against Raziyye and laid siege to Delhi. After this battle, the power of Sultan Raziyye’s kingdom, now that peace had been achieved, spread over a wide area. Indeed all the high offices of state and the provinces were in the hands of the Turkish slaves who had been bought by Iltutmush and even if they squabbled amongst themselves for their own personal advantage, they were able to come together and form a united front in face of any threat directed against them.

Faced with this situation Sultan Raziyye, exchanged her women’s clothes for those of a man and in this fashion went out among the people with her bow and quiver always at her side. Again, we see how a women are discriminated against in war even though, at the beginning of Islam, Ai’sha was the commander-in-chief of an army. Sexism was so common that even ruling women had to eliminate external signs of femininity.

Another revolt followed. In the end she lost the throne.

Raziyye’s only thought, as she hurried from one border to another with her bow and quiver on her back, was to repel the Hindu invasions, to subdue the rebellious nobles, and to revive the justice and model administration of her father’s reign … These jealous nobles, while accepting any weakness of this kind as the most natural right, both of themselves and of male rulers, considered it an unforgivable fault in a brave and skilful ruler like Raziyye, who was, in fact, far from any such thing, and deserted their noble empress, from whom they had always received such generosity, at the time when she most needed them.

After another lost battle, her opponents murdered her. But her competent leadership will be part of history, if we do not permit the story of her success as female ruler in the Muslim Medieval Age to be buried in oblivion. Apart from her military and administrative skills, Sultan Raziyye possessed great artistic talent as a poet.

With the male rulers following her, by 1266 the Shemsiyye dynasty had grown weak, law and order had deteriorated and power had passed into the hands of the eunuchs. Finally, the country, with its borders considerably reduced compared to the time of Sultan Iltutmush and his daughter Sultan Raziyye, was left to the house of Balaban.

Raziyye has to be remembered because she is an example of a successful female ruler in Muslim history who was approved by people and ruled with justice.

If you are interested in reading “Female Sovereigns in Islamic States,” you can find it on Amazon here.