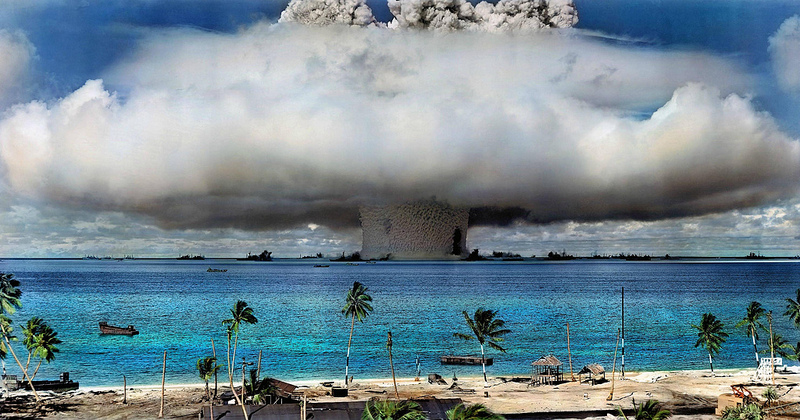 File: A nuclear weapon is detonated at Bikini Atoll in the Marshall Islands in 1946. (Image has been colorized. Credit: US Government)

Noodge: This is my mother’s word, it means to be nosey, pushy and a general pain in the ass. It sometimes means having an attitude the size of Montana on your shoulders and projecting that all over the place. Generally this is not a nice thing but can be used in a nice context. —Urban Dictionary

Nuke: To attack with a nuclear weapon, or to otherwise bring about widespread and utter destruction.

I’d like to thank the universal goodness that former comedian turned death monger Roseanne Barr does not (I hope) have access to nuclear weapons.

I say “former” comedian because in the last few years Barr has taken a decidedly unfunny turn and outlook on life.

After Barr accused Green Party presidential candidate Dr. Jill Stein of being a “Zionist” in the 2012 Green Party primaries (which Stein won and Barr lost), and after running for president on the ticket of the stridently antiwar Peace and Freedom Party, Barr has used her Twitter account to become a mega-Zionist. I stopped following her after she urged Israel to nuke Iran. As a human being, nothing to me is more monstrous.

Recently, the person who used her acting skills to convince me and the Peace and Freedom Party that she was also about peace tweeted this to her almost 300k followers on Twitter:

Roseanne Barr tweets: “I hope all the jews leave UC Davis & it then gets nuked!” (Screenshot)

This tweet was apparently in response to the vote to divest from Israeli investments at UC Davis. The Tweet is shocking in its callousness. I understand the tweet was left up for about 10 hours before some cooler head prevailed and it was removed, but as we can see, nothing online ever really gets deleted.

As universally shocking as this tweet is and how revealing it is of the character of the person who did tweet it, I live about 20 miles from UC Davis. As most people over the age of 10 know, nuclear devastation is not confined to a very small geographic area. Personally, it is very painful that Barr would love to see my family, including my five grandchildren who also live this close to Davis, die a very torturous death because we are not “Jews.” File: Roseanne Bear holds a microphone while speaking at the Hard Rock Cafe in Maui in 2010. (Wikimedia / Leah Mark)

On the other hand, what if she tweeted this: “I hope all gentiles leave UC Davis and then it gets nuked.”

How long do you think it would be before she was in Gitmo being treated as a terrorist? As much as I deplore her actual tweet, I would deplore one that wanted to incinerate Jews just as strongly.

As a member of the Peace and Freedom Party (I want to iterate that I am NOT speaking in that capacity and only speaking for myself) I would like to reaffirm OUR position against war and the use of nuclear weapons.

The Peace and Freedom Party was born out of the struggle against the Vietnam War and the government’s violent repression of those protests. The Party has long been committed to its name: Peace and Freedom. Until the Green Party got ballot access here in California, we were the only party that offered legitimate opposition to the two parties that will (and have) used nuclear weapons.

I have also received several messages about my relationship to my former running mate, even though I saw the writing on the wall while I was running against her and wrote this: “No Longer on Campaign, Formal Announcement.”

The few weeks that I was her running mate were devastating for me. I had known Roseanne for years before that star-crossed collaboration and I considered her a friend.

Roseanne was flawed, of course, as are we all. I saw a person who I truly believed was committed to the same principles that I was, but Twitter is not Barr’s friend and she started to tweet some things that were 180 degrees from the platform of the party and my own personal platform, such as: “If people go on welfare, birth control should be mandatory.”

Side note: I also disagreed that our entire campaign should be by tweet, especially ones that were so contrary to what we, as a party, stand for.

Then some people have defended her most recent foray into outrageousness by saying exactly that, “She is famous for saying outrageous things.”

Well, so am I, but I only consider what I say outrageous in the context of Imperial Capitalism like, “war of aggression is always wrong.”

Common sense dictates that there is a profound difference between what someone says in the heat of passion (and obviously Roseanne is passionate in her hatred of non-Jews) and what one takes the time to type out (probably via iPhone) in a carefully crafted tweet. I cannot think of any clearer expression of hatred that is more evil than wishing a large part of Northern California be destroyed or radiated.

P.T. Barnum once said, “Publicity is not measured in content, but inches,” and Roseanne’s public persona has now completely turned into a circus: the kind that abuses animals and is filled with horrific clowns (oops, that’s all circuses).

The moral of this story is if a party has “Peace” in its name and platform, let’s more carefully vet our next POTUS pick to make sure that they would not use their power to push the button of a deadly weapon of mass destruction.