FILE – In this June 9, 2014 file photo, the burn off flame of natural gas lights up the night sky in Williston, N.D. (AP Photo/Charles Rex Arbogast, File) 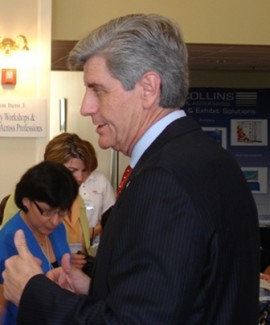 Seconds later, things got more serious, as Bryant spoke to an audience of oil and gas industry executives and lobbyists, as well as state-level regulators.

At the industry-sponsored convening, which I attended on behalf of DeSmogBlog, it was hard to tell the difference between industry lobbyists and regulators. The more money pledged by corporations, the more lobbyists invited into IOGCC‘s meeting.

Perhaps this is why Bryant framed his presentation around “where we are headed as an industry,” even though officially a statesman and not an industrialist, before turning to his more stern remarks.

“I know it’s a mixed blessing, but if you look at some of the pumps in Mississippi, gasoline is about $2.68 and people are amazed that it’s below $3 per gallon,” he said.

Bryant then discussed the flip side of the “mixed blessing” coin.

“Of course the Tuscaloosa Marine Shale has a little problem with that, so as with most things in life, it’s a give and take,” Bryant stated. “It’s very good at one point and it’s helping a lot of people, but on the other side there’s a part of me that goes, ‘Darn! I hate that oil’s dropping, I hate that it’s going down.’ I don’t say that out-loud, but just to those in this room.”

That is, fracking is expensive and relies on a high global price of oil. A plummeting price of oil could portend the plummetting of many smaller oil and gas companies, particularly those of the sort operating in the Tuscaloosa Marine.

Governor Bryant’s fears about the price of oil are far from unfounded, serving as a rare moment of frank honesty from Mississippi’s chief statesman.

“Other factors that could limit production are public pushback as a result of health and environmental concerns, and capital constraints that could result from lower oil or gas prices or higher interest rates,” reads a passage in the Post Carbon report. “As such factors have not been included in this analysis, the findings of this report represent a ‘best case’ scenario for market, capital, and political conditions.”

Recent articles published in the business press further highlight the key caveat in the Post Carbon report, as did a recent Halcón Resources Corp investor call that discussed the Tuscaloosa Marine.

“Tuscaloosa Marine Shale, I’m going to do my darndest to make sure that people understand that we’re highly confident and we like the play,” Halcón Resources CEO Floyd Wilson said on the call.

“However, it is currently a relatively high-cost play and with currently low crude prices we will not be devoting a significant portion of our resources to TMS in the near term,” Wilson continued. “Having said that the TMS is certainly more susceptible to low oil prices than our other crude plays due to the higher well costs, a tempered approach to drilling in this play in the near term is warranted.”

A recent report published by energy investment firm Tudor, Pickering, Holt & Co., described Tuscaloosa Marine as the shale basin most likely to face severe impacts from the falling price of oil. The Tudor report said that drillers operating in the Tuscaloosa require oil to sell at $70-$90 per barrel for fracking to remain economically viable there.

Mississippi does not stand alone in feeling the hurt associated with a drop in the global oil trading price.

Bloomberg reported that companies operating in Utah and Texas have already slowed down drilling as a result of the high oil prices they had previously relied upon. In total, 19 U.S.shale plays will no longer be profitable if the price of oil continues to fall.

“Everybody is trying to put a very happy spin on their ability to weather $80 oil, but a lot of that is just smoke,” Dan Dicker, president of MercBloc, said in an interview with Bloomberg. “The shale revolution doesn’t work at $80, period.”

Not all industry insiders, however, are trying to spin things.

“If prices go to $80 or lower, which I think is possible, then we are going to see a reduction in drilling activity,” Eads told Bloomberg. “It will be uncharted territory.” A Wall Street Journal article from late October concurred with others who said the Tuscaloosa will take a beating with the fall of the price of oil. But it also concluded that for operators in many other more prolific shale basins like the Bakken Shale and Eagle Ford Shale, $60 per barrel is the break even point, not $80.

To the smaller companies operating in the Tuscaloosa, recent oil pricing developments are likely no laughing matter.

But that didn’t stop Governor Bryant from cracking a joke to conclude his presentation at the IOGCC annual meeting. “Fraser Institute says Mississippi is the second in the world for oil and gas development … so we came up with this little idea,” Bryant joked. “We have the number one and number three football teams in the nation: one Mississippi, two Mississippi, three Mississippi. That used to be a call signal for how long you could take before you could rush the quarterback.”

But as with all numbers, it depends on who’s counting. And the Fraser Institute is an associate member of the industry-funded State Policy Network “stink tanks.”

As with shale gas production numbers and figures, it always pays to consider the source.