British fashion designer Vivienne Westwood speaks at an anti-fracking protest outside the Palace of Westminster in London, Monday, Jan. 26, 2015. Lawmakers are due to debate a bill that would halt fracking in Britain, after the all party Environmental Audit Committee said it had ‘huge uncertainties’ about the impact of fracking on the environment. (AP Photo/Alastair Grant)

*Worldwide.  As the corporate oil crisis deepens, will governments “earn the wrath of society by doing what they have always done—bailing out their friends in big business—or admit that they got energy policy wrong and make late and painful changes”? Answer: “Just let them fail. It will be good for the economy and jobs, and even better for our safe planetary existence.”

*USA and Europe.  Seems there’s a nascent movement among farmers on both continents to shun GMO crops and return to the old fashioned seeds that produce reliable results—and at a lower price. May it flourish.

*USA.  Four pipeline explosions this month—Enterprise Productions pipeline in WVA, GulfSouth’s pipeline in MS, Bridger Pipeline in MT, and a ND pipeline–which the US Senate apparently didn’t notice. Koch brothers’ alleged role in all this?

*USA.  Sen. Maria Cantwell (D-WA) says it’s time the US Department of Transportation “should move its behind, finalize and enforce safety rules for tanker cars,” those DOT-111s which can erupt into flames when punctured.  Rep. Peter DeFazios (D-OR) agrees. But then Sen John Thune (R-SD) says the gubmint is “moving too quickly” on “phasing out or retrofitting” the dangerous old things.

*USA.  The US Ninth Circuit Court of Appeals has postponed until mid-May ruling on halting traffic of those DOT-111s. They’re waiting to see what action the US Dept of Transportation might take.

*USA.  Chevon and BP will “work together to explore, appraise and, possibly, develop 24 offshore leases in a deepwater part of the Gulf of Mexico known as the lower tertiary … [where oil] “tends to be hotter, … under more pressure, … thus more difficult and costly to bring to market.” What could possibly go wrong?

*USA.  It’s gotten so bad (or not, depending on your point of view), that The Onion has addressed fracking.

*USA.  NASA just launched a Delta 2 rocket which will gather data for mapping climate change. Yay on them for getting the rocket up before Sen. Ted Cruz (R-TX) could stop it.

*AZ.  San Carlos Apache Tribe Chairman Terry Rambler has invited “tribal leaders and citizens” to a day of prayer now that Congress has given away some of their sacred land to Resolution Copper (Rio Tinto subsidiary) for a huge, ugly mining project. Rambler predicts a stand-and-fight over this. Update: Local reaction to the give-away.

*CA.  Kern County supervisors anticipating “a massive shortfall in property tax revenues because of tanking oil prices.” 14 land rigs are active in CA, down from 48 last June, and only 147 notices filed of intention to undertake new drilling.

*GA.   How do you spell nooclear? Three years over-due and at least $1 billion dollars short in GA, courtesy of Georgia Power. Actually, courtesy of the rate payers, though how much isn’t sorted out yet. It’s called Plant Vogtle, which, if you squint real hard, almost looks like Plant Hogtie.

*IL.  Waaah! “Stopping a threatened economic meltdown of the Illinois nuclear power industry is now in the hands of state lawmakers.” Exelon is upset that they aren’t “more profitable” and they want the state to make them more profitable. Competing in the classic capitalist way with solar and wind is hard.

*LA.  So, the judge is thinking about how much BP should pay for Clean Water Act violations in the Macondo well blowout back in 2010. Andarko is already fighting to avoid $1billion in penalties.

*ND.  “North Dakota’s oil industry is pushing to change the state’s radioactive waste disposal laws as part of a broad effort to conserve cash as oil prices tumble.” They want to dump more of their radioactive fracking waste in ND landfills rather than trucking it out-of-state, fer goodness sake!

*OK.  Daily earthquakes have people so rattled they’re discussing public protection vs private profit. Scientists point to “the deep wastewater disposal wells … [but] officials have been reluctant to crack down on an industry that accounts for a third of the economy and one in five jobs.” A case pending before the OK Supreme Court could have potential big impact. Fracking in Utah’s Uinta Basin. In the foreground, a fracking rig is topped by a US flag. In the distance, the landscape is covered with other extraction equipment. (Flickr / WildEarth Guardians)

*PA.  Data collection and analysis in PA show that in a little over 3-1/2 years “the top 20 offending fracking companies committed an average of 1.5 violations per day.” [emphasis added] Of course, those are violations that came to the attention of state officials.

*PA.  They call it “clean power,” but the waste generated by nuclear plants is anything but. Big dump of it about 40 miles outside Pittsburgh, buried in shallow trenches. The US Army Corps of Engineers says they’ll clean it up for $400 million. Others say that’s “grossly underestimated.” In this Tuesday, Sept. 11, 2012, file photo, Greenpeace activists dressed as wild animals hold placards during a protest outside the office of the Indian Coal Minister demanding a halt in allocation of forest land for coal mining, in New Delhi, India. A court has ordered the Indian government to release $300,000 sent by Greenpeace’s foreign partners for use in India by the environmental group. (AP Photo/Altaf Qadri)

*Canada.  Results of the investigation into failure of the Mount Polley tailings pond are in. Overall, the collapse was due to failure of adequate design. Recommendations (p. 27) address corporate governance and commitment, “safety and regulation of all phases,” “strengthened” regulatory and professional practices, etc.

*Canada.  Big TD Securities Mining Conference in Toronto turned into a down-home type brawl. No mention of Palins involved, though.

*Peru.  The Kichwa, who live deep in the Amazon, are protesting the government’s failure to halt damage from oil operations (only on-going for 40 years!) in their homeland by criss-crossing the River Tigre with cables, thus stopping oil company boats. “The price of oil is low, but the pain caused is extremely high.”

*Peru.  Two police officers reportedly killed when local farmers, armed with rocks and slingshots, tried blocking a mine entrance. Aquillas is one of five mines in Puno owned by Clemsa, all reportedly contaminating local water.

*Ecuador.  Pursuit of oil profits has left indigenous people in the Ecuadorian Amazon with 1,000+ “open-air unlined waste pits filled with crude and toxic sludge, … 18 billion gallons of toxic wastewater … from 350 oil wells.” And the government continues to conduct “more oil and mining operations.” 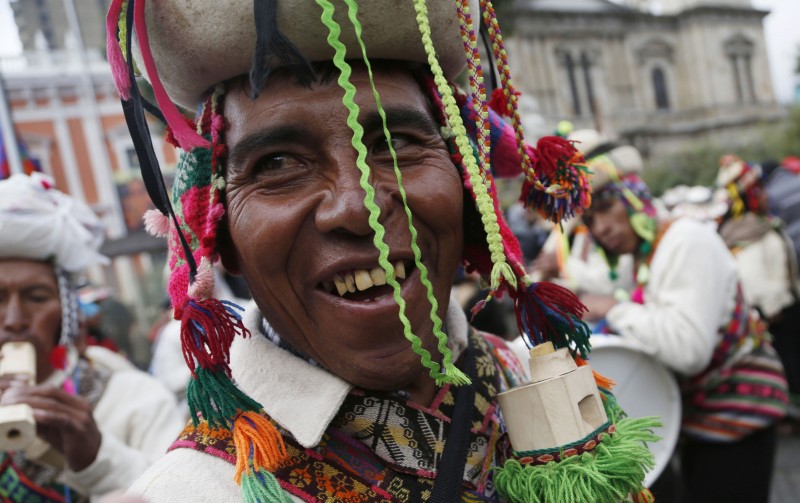 *Bolivia.  President Evo Morales “renationalized Bolivia’s oil and gas industries” and invested in the public sector. Poverty is down by 25% (extreme poverty by 43%), and the rich-poor gap “has been hugely narrowed.” Morales’ third inauguration was held in Tiwanaku, a pre-colonial city, with full participation by indigenous people. Don’t miss the portrait of 18th century rebel Bartolina Sisa, made from “local potatoes, carrots, corn and other vegetables” — and don’t miss the story of Bartolina Sisa.

*Australia.  Scientists are trying to “genetically alter species of coral to help them cope with rising sea temperatures” on the Great Barrier Reef.

*Planet Earth.  New, cool way of looking at The Earth.