__If we don’t reduce CO2 in the atmosphere, “the giant East Antarctic ice sheet will melt,” perhaps by the end of this century, leading to sea rise of almost 200 feet.

__Sea levels “are rapidly increasing, probably at the fastest rate in 28 centuries.” 20% of residents in the US Southeast and 50% in Florida could be affected. Altogether, 13.1 million US residents could be displaced by 2100, costing $14 trillion. Millions of people in 30 other countries will be displaced, too.

__Latest report from the Great Barrier Reef: bleaching is worsening “in most pristine parts” of the reef and coral death is being observed in the northern sections. 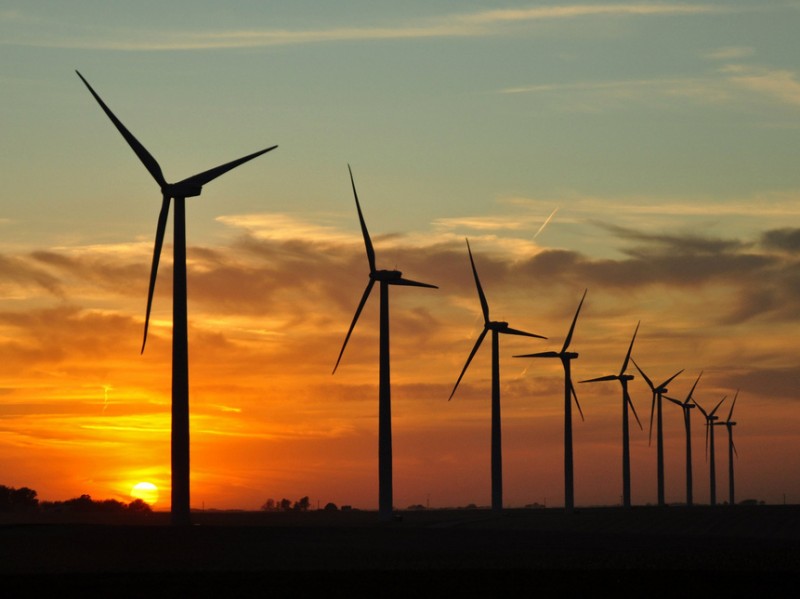 A row of wind turbines stretches toward the horizon, photographed against a sunset. (Photo/Tumbling Run via Flickr)

__If we double renewable energy to 36% in 2030, we’d save “15 times more than it would cost” in health and agriculture. That’s from the International Renewable Energy Agency (IRENA).

__Minnesota on the move! Last year, 21% of electric power in Minnesota came from renewables (compared to 13% nationwide). 17% “of the state’s total energy base” was from wind. At this rate, they might have to raise their 2030 goal. In this Nov. 29, 2015 photograph, an activist holds a sign that reads “Global Warming Is A National Security Issue” at a protest in Washington, D.C. (Flickr / Susan Melkisethian)

People speaking out, acting up, making a difference

__The US Interior Department will “withdraw its plan to permit oil and gas drilling off the southeast Atlantic coast” following a Georgia-to-Virginia outcry.

__Heads up! The US State Department is re-opening a 30-day public comment period regarding permits for operation of pipelines beneath the St. Clair and Detroit Rivers in Michigan. Two of them, built in 1918, could be permitted to transport “crude oil and other liquid hydrocarbons.”

__Coast-to-coast: 43 Quebec chiefs, the Union of British Columbian Indian Chiefs and the Iroquois Caucus (Mohawk nations) oppose TransCanada’s pipeline for moving 1.1m barrels of crude/day from Alberta to refineries in the east. 57% of  Quebec residents are also opposed.

__FERC didn’t approve a “massive liquefied natural gas export terminal” at Coos Bay, Oregon. The gas was to be shipped to Asia with no documentation that “public benefits outweigh the adverse effects.” 90% of landowners along the 232-mile pipeline route opposed it. Veresen and Williams Partners might reapply, but prospects aren’t promising, given public resistance.

__Portland Pipeline’s 236-mile Portland, Maine to Montreal pipeline, built in 1941, is not in use. By reversing its flow, tar-sands oil could be brought from Canada to Portland. There’s a ban on exporting oil through South Portland, however, and a lawsuit is pending.

__Brevard County, Florida now has a ban on fracking “well stimulation” techniques. The new ordinance specifically prohibits “any well stimulation techniques originating” outside the county “‘that in any way enters onto, into or under the ground within [county] boundaries.” Wow!

__Joe Pool Lake Dam, source of the City of Midlothian, Texas’ water supply, experienced a few earthquakes and some seepage and slides, which raised concern about nearby oil and gas fracking. The Army Corps of Engineers responded, extending “its no-fracking zone around [the dam] to protect it.”

__20 EU mayors are objecting to a “loophole in diesel cars’ pollution limits” granted by the EU. They object that the  EU “has rubber-stamped a permit to pollute, at the expense of public health.”

__SNP supporters against underground gasification, or SMAUG, are urging Scottish government members “to stand firm” against lobbyists by extending their temporary fracking moratorium to a full ban.

__Stop the Drill protests at Woodburn Forest in Ireland as exploratory drilling gets commences. Drinking water for Belfast and Carrick comes from a nearby reservoir which Northern Ireland Water has leased to InfraStrata for the drilling. This struggle is underway at the site, in court, and at the Mid and East Antrim Council. __Bears Ears in southern Utah, 1.9 million acres, could be protected from mining and drilling if Hopis, Navajos, Utes, Ute Mountain Utes and Zunis, together with conservationists, can get the area declared a national monument. Utah lawmakers are so livid at the possibility that they’re “considering a quixotic $14 million lawsuit to force a transfer” of the acreage from the feds.

__Montana’s Dept of Environmental Quality has ok’d the “final cleanup at the [Upper Blackfoot Mining Complex] this summer” which was contaminated back in 1975 when some “200,000 cubic yards of toxic tailings [were released] into a marshy area and the Blackfoot” River. They were mining “Lead, zinc, and copper … gold and silver.”

__Peabody Energy, US coal mining giant, facing Chapter 11 bankruptcy protection? Looks like it since Peabody just “skipped a $71.1 million interest payment.” Note: Peabody is liable for $2bn in cleanup of its US mines.

__17 bodies in a mass grave in southeast Venezuela, each shot in the head. Government says a “criminal gang“ is responsible but locals speak of “armed men wearing vests bearing police insignia” detaining the men, all wild-cat miners.

—New South Wales residents who protest mining operations, including seam gas coal mining, now face fines of more than $5,000—and 7 years in jail.  Mining firms such as CSG, Metgasco and Santos may flex their muscle, but the Knitting Nanas are out in full force, too.

__Another member of COPINH has been gunned down in Honduras—four bullets fired into his face. He was Nelson Garcia and he, like Berta Cáceres, was fighting against the Agua Zarca mega-dam on the Gualcarque River. Mega-dams are “worse than colonization.” “730 leading Latin American experts and scholars” are urging Secretary of State John Kerry “to halt aid and support to Honduras” because of the murders. __”Choking and Lifting” are techniques frackers are using to keep oil production going although 75% of rigs are idle. Choking entails keeping output at new wells to a minimum while lifting is used to squeeze more oil out of old wells.

__Barclays is recommending oil investment since 1) Big Oil has become better at “cost discipline” and “operational efficiency” and 2) people will hop in their cars and drive around all summer.

__Shale gas  “can create even more pollution than coal.” LNG gas facilities scheduled to be built in the US are expected to emit as much “climate-changing pollution [as] 19 coal-fired power plants.”

__Having taken on solar energy in Nevada,  now Warren Buffett’s set his sights on bigger tar-sands BNSF oil-train biz, but is he telling shareholders all the risks involved?

__State-owned Nigerian National Petroleum Corporation “failed to pay the government $16bn.” No explanation, no excuse, no nothing. Meanwhile, about 60% of Nigerians live in grinding poverty.