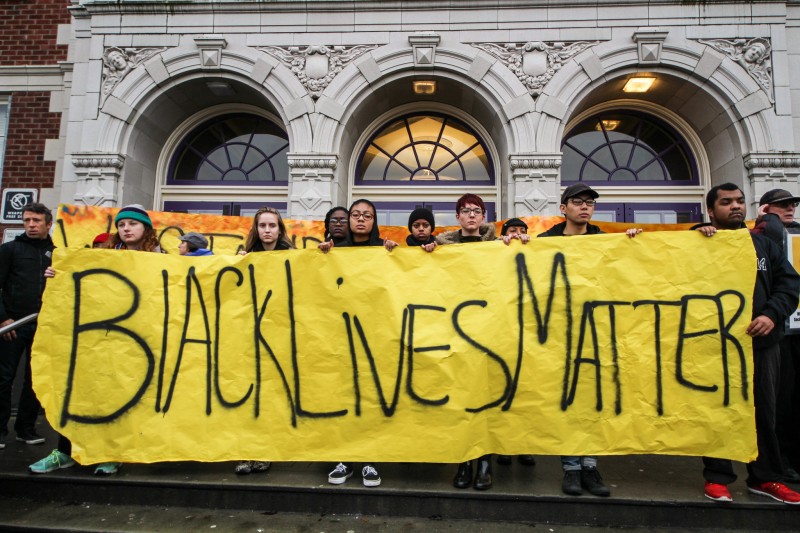 More in this series: 4 Cases Of Unpunished Police Brutality With Video Evidence by David Rushton, and Every Town Has A Mike Brown by Matthew Lerma

In the USA, the police are protected not the citizen

The shooting of an unarmed youth, Michael Brown, struck a spark in the hearts of minorities wanting to have equal and fair treatment when dealing with the police. The Black Lives Matter Movement came out of Ferguson, Missouri but it spread across the nation on November 24 with the news that Darren Wilson would not be indicted for his actions.

The case is confusing and too convoluted to get into here. However, the root of the case has nothing to do with either one of these people. It goes back to a trend of excessive police force in black and brown communities in order to “protect” whites. It is about police engagement and how much authority police are given in situations of arrest. Darren Wilson and Michael Brown are opposing symbols. And the nation witnesses this.

People like Eric Garner, Tamir Rice, and John Crawford are examples of excessive police force in situations that don’t warrant excessive force. Race is a factor in many police shootings but not the only factor because some whites have experienced the same situations.

Using black-on-black crime as an excuse to disregard back and brown unarmed people killed by cops is a problematic excuse and lazy analysis. According to the US Department of Justice, the majority of murders were intra-racial, with 84% of white homicide victims murdered by whites, and 93% of black victims murdered by blacks. These stats come from “Homicide Trends in the United States, 1980-2008“ written by Bureau of Justice Statistics statisticians Alexia Cooper and Erica L. Smith.

It seems that people don’t understand that crime is actually going down. The Federal Bureau of Investigation data show that all types of violent crimes were lower, with murder and non-negligent manslaughter off 4.4 percent to 14,196, the lowest figure since 1968. Rape was down 6.3 percent and robbery fell 2.8 percent. These issues still exist and will never go away entirely but they are improving. Intra-racial crime happens because Americans live in intra-racial communities. If you want to solve that, just diversify your neighborhoods.

Issues like white flight, gentrification, low-income housing, poor schooling, poor gun laws/regulations, and high unemployment rates are reasons crime happen in the first place. Our nation does not invest in its people and citizens take it out on other citizens.

There are some people who do not follow through on that obligation and that’s where the police come in. Depending on the crime, the police should also engage with citizens in a civil manner because citizens pay their salaries and it’s the humane thing to do. A man allegedly selling single cigarettes should probably be let go with a warning. In grand scheme of things, it is not a big deal!

Police officers are paid with tax dollars, they are authority figures and they are given a lot of power with very few qualifications. They must be held accountable for their actions because if they can’t, citizens can’t be. So cameras can be added to uniforms, new training can be introduced, and rubber bullets can replace metal ones but the justice system has to change first when dealing with police indictments and grand juries.

This year proves that Twitter may be the most important social networking site in the modern age. With the hashtags #BlackLivesMatter, #CrimingWhileWhite, #Ferguson, #EricGarner, #ICantBreathe, and many more, social activism and race debates have risen to new heights. Twitter lets us peer into the different worlds occupied by blacks and whites in America.

If #GlenBeck believes there should have been an indictment, everyone should #EricGarner — Ricky Riley (@epicarthouse) December 4, 2014

#CrimingWhileWhite proves white ppl get 1 crucial thing from police- the benefit of the doubt- which can be the diff. between life & death

Car load of underage boys pulled over with open beers in the car. Police told us to go home. Too many times to count. #CrimingWhileWhite

After buying a new car, I was detained for half an hour because the cop didn’t believe “I could afford that car legally.” #alivewhileblack — Superhero & 00Negro (@MarcusTheToken) December 5, 2014

I want to end on this note: our police have a difficult job but citizens having confidence in them will make that job easier. People don’t have to like police officers for them to do a good job but, if they operate well in a community, respect, confidence, and trust will be rewarded. They must improve before they get anything from the citizens that pay them. Black people must be treated the same way as whites when dealing with the police.