A new documentary series produced in Israel tells the story of the Iron Dome missile system, but as Kathryn Shihadah reports, it leaves out crucial details about how the weapon is used and who funded it. A new docuseries produced in Israel chronicles the development and use of Israel’s multi-billion dollar, U.S.-subsidized Iron Dome missile defense system. The mechanism, an extension of America’s own military-industrial complex, is designed to intercept primitive rockets from Gaza and epitomizes Israel’s approach to Palestinian resistance: denial

END_OF_DOCUMENT_TOKEN_TO_BE_REPLACED

Kathryn Shihadah examines the legacy of Danny Danon, whose hawkish anti-diplomacy recently came to end after a five-year stint as Israeli Ambassador to the United Nations. 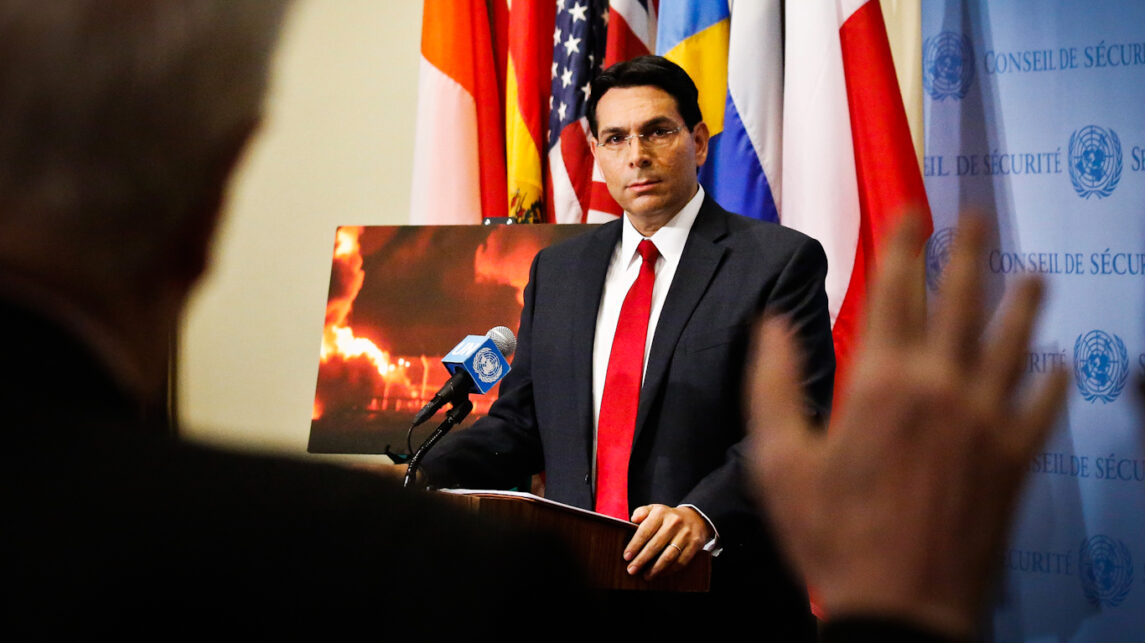 The United States is Israel’s best friend and ally in the world. It contributes over $10 million a day in no-strings-attached military aid despite the fact that Israel’s human rights record, according to the State Department’s END_OF_DOCUMENT_TOKEN_TO_BE_REPLACED

“There are more than 40 million Black Americans, they spend more than $1.3 trillion a year, so we’re a measurable market, a measurable group of people, easily identified, and we think we can also contribute to the advancement of Israel.”  – Glenn Plummer, Bishop of Israel

The Church of God in Christ, or COGIC, is certainly not the first evangelical group to embrace the state of Israel. But unlike most evangelical denominations, this one is mostly African American. Its leadership includes

END_OF_DOCUMENT_TOKEN_TO_BE_REPLACED

Columbia’s President has already hinted at efforts to undermine the referendum’s success, claiming that the BDS is tied to anti-Semitism and ignores “similar issues in other countries.” In a political climate that broadly supports Israel both financially and ideologically, a student group at Columbia University has beaten the odds, passing a referendum that calls for circumspection of its school’s investment in the state. What makes this accomplishment particularly striking is the fact that Congress and U.S. states are

END_OF_DOCUMENT_TOKEN_TO_BE_REPLACED

Trump’s arrangement to sell F-35 warplanes to the United Arab Emirates has prompted Israel to issue a list of demands – including must-have advanced aircraft and other accouterments. The United States continues to use the American taxpayers’ expense account to prioritize Israel’s aspirations. Close on the heels of the so-called Abraham Accords earlier this month, which normalized relations between Israel and the Arab states of Bahrain and the United Arab Emirates (UAE), the Trump administration is formulating plans to

END_OF_DOCUMENT_TOKEN_TO_BE_REPLACED A dauntless supporter of Israel, House Appropriations Committee Chairwoman Nita Lowey (D-NY) will retire in January after over thirty years in the House. Lowey hopes to leave

END_OF_DOCUMENT_TOKEN_TO_BE_REPLACED

The period from March to August 2020, a period marking the height of the coronavirus pandemic, represented the highest rate of Israeli home demolitions in four years. Israel destroyed nearly 90 Palestinian-owned structures last month, rendering 202 people homeless, half of them children. The demolitions mark a fourfold increase in the average number of demolitions carried out by the Israeli government in 2020. The United Nations Office for the Coordination of Humanitarian Affairs (OCHA) reports that, in spite