Opinion — When news first broke that Medium, one of my primary blogging platforms, had closed the accounts of Trump-supporting pundits Mike Cernovich, Jack Posobiec and Laura Loomer, I tweeted the following in response:


Hours later, right on cue, prominent Mother Jones Senior Reporter Shane Bauer was singing the praises of Medium’s recent account suspensions and tagged Medium’s Twitter account saying they need to take it further and include left-wing writers like myself due to my repeated criticisms of the pro-regime change Syria narrative.

“This is good,” Bauer tweeted, “but If @Medium is serious about cracking down on conspiracy theorists, it needs to go beyond the alt-right and reign in the garbage published on Syria by people like @caitoz.” 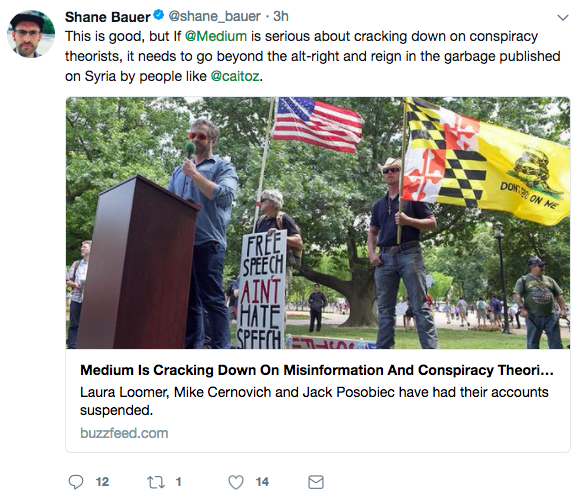 See how quickly that happened? Bauer wasn’t the first to call on Medium to silence leftist writers like me for our skepticism of an empire with an extensive history of using lies, false flags and propaganda to manufacture support for regime change interventionism against noncompliant nations, and he will not be the last. They get you okay with silencing offensive right-wing voices (who contrary to Bauer’s claim are in this case not even “alt-right” by anyone’s standards, including the Anti-Defamation League), then they target the true left, who present the biggest threat to the US oligarchs.

Empire loyalists like Bauer will continue demanding that Medium delete writers like me who unapologetically promote skepticism of establishment narratives involving longtime imperialist targets like Russia and Syria, and they may well succeed, which will set me back a bit since I’ve spent nearly a year building up an audience there.

But that’s the least of our problems. Support for this broader trend of dissenting leftist voices being aggressively silenced has permitted Google algorithm changes to slash the viewership of leftist outlets like World Socialist Web Site, CounterPunch, and Alternet, as well as essential nonpartisan anti-establishment outlets like WikiLeaks, Consortiumnews, and Truthout. I myself have had my account suspended by Facebook for posting an article about known false flag operations around the world, and by Twitter for attacking the Democratic party and the establishment Russia narrative. 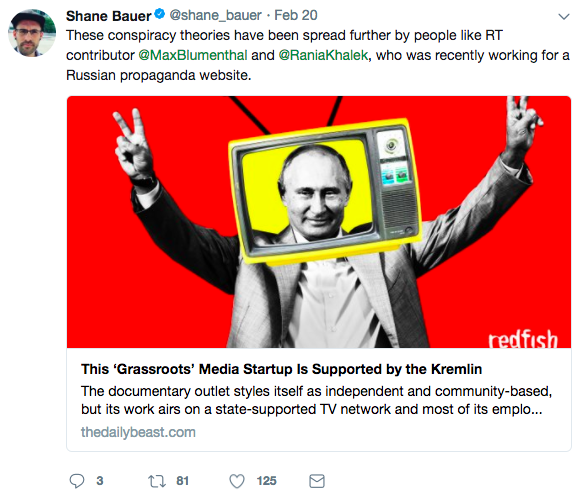 In a corporatist system of government, where corporate power is not separated in any meaningful way from government power, corporate censorship is government censorship. The new empiredoesn’t silence dissent using government censorship, it simply refuses them camera time on the plutocrat-owned corporate media and silences the rest via social media corporations. As recently noted by WikiLeaks editor-in-chief Julian Assange, Medium’s CEO is also the co-founder of Twitter.


Medium has been good to me thus far and I have never had any issues with censorship there at all, unless you count a moderator once asking me to please stop cursing at people who accuse me of being a Kremlin agent. That will not stop empire loyalists from loudly demanding my removal, and if it happens you can be certain I’ll use the Streisand effect to draw more attention to my work than ever. As I’ve said, my leftist haters are out of ammo and my centrist and right-wing haters only help me, so the only remaining attacks available are the ones which will uplift me.

This broader trend which we are undeniably seeing is extremely pernicious, however, and it should concern us all. The plutocracy which is driving our species toward extinction is far more afraid of the left than they are of the right, which is why they’ve poured unfathomable amounts of resources into sabotaging leftist and civil rights groups with psyops and infiltrations.

Again: the only people celebrating the censorship of conservatives are leftists who haven’t been paying attention, and centrists like Shane Bauer who have been. Censorship is not our friend, my lefty brothers and sisters. Never has been, never will be.