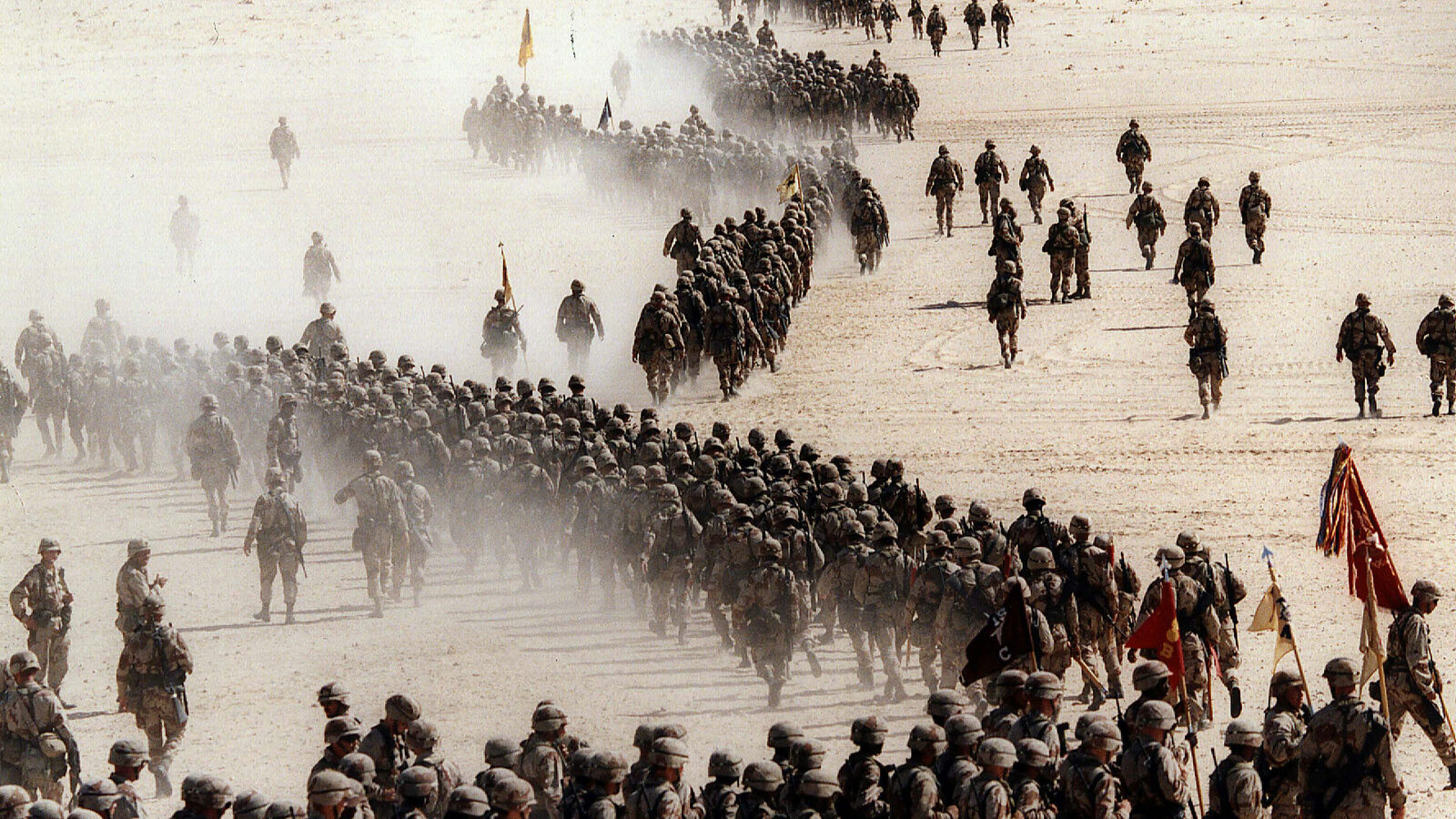 Echoes Of 1991 Gulf War Linger On In Mideast The U.S. 1st Cavalry Division deploy across the Saudi desert on during preparations prior to the Gulf War, 1990. (AP Photo/Greg English)

The 1991 Gulf War saw only 100 hours of ground fighting as U.S. forces entered Kuwait to end the Iraqi occupation but echoes of that conflict have lingered on for decades in the Mideast.

The war pushed America into opening military bases in the Persian Gulf and Saudi Arabia, drawing the anger of an upstart militant named Osama bin Laden and laying the groundwork for al-Qaida attacks leading up to Sept. 11, 2001. Saddam Hussein, demonized as being worse than Adolf Hitler by President George H.W. Bush, would outlast his American rival in power until Bush’s son launched the 2003 American-led invasion that toppled the Iraqi dictator.

Now, 25 years after the first U.S. Marines swept across the border into Kuwait, American forces are battling the extremist Islamic State group, born out of al-Qaida, in the splintered territories of Iraq and Syria. The Arab allies that joined the 1991 coalition are fighting their own conflicts both at home and abroad, as Iran vies for greater regional power following a nuclear deal with world powers.

In all, the United States finds itself in the quandary it hoped to avoid back in 1991.

“Had we taken all of Iraq, we would have been like the dinosaur in the tar pit — we would still be there, and we, not the United Nations, would be bearing the costs for that occupation,” the late U.S. Gen. Norman Schwarzkopf, commander of Desert Storm, wrote in his memoirs.

Iraq invaded Kuwait on Aug. 2, 1990, angry that the tiny neighbor and the United Arab Emirates had ignored OPEC quotas, which Saddam claimed cost his nation $14 billion. Saddam also accused Kuwait of stealing $2.4 billion by pumping crude from a disputed oil field and demanded that Kuwait write off an estimated $15 billion of debt that Iraq had accumulated during its 1980s war with Iran.

Fearing Saudi Arabia could be invaded next, U.S. officials moved quickly to deploy troops to the region. After months of negotiations and warnings, the U.S. launched its assault on Iraqi forces in Kuwait on Feb. 24, 1991.

In purely military and political terms, the first Gulf War marked a tremendous success for a U.S. still haunted by Vietnam. America suffered 148 combat deaths during the entire conflict, while 467 troops were wounded out of the over 500,000 deployed, according to the Defense Department. It held together an allied army, its war effort was supported by a number of United Nations resolutions, and the conflict cemented its position as the sole world power following end of the Cold War and the collapse of the Soviet Union.

America’s Arab allies also footed much of the bill for the $61-billion war, with both Saudi Arabia and Kuwait contributing some $16 billion while the United Arab Emirates offered $4 billion, according to U.S. congressional reports. Japan and Germany together contributed another $16 billion, while South Korea gave $251 million. The U.S. covered the rest.

But the key players in the Arab world on whom the U.S. relied on during the conflict are long gone.

Saudi King Fahd died in 2005. A popular uprising toppled Egyptian autocrat Hosni Mubarak in 2011. Syria’s totalitarian ruler Hafez Assad, a longtime U.S. foe who joined the Gulf War effort to reap billions in aid and diplomatic benefits, died in 2000. His son, President Bashar Assad, still clings to power amid a five-year civil war that has killed more than 250,000 people and flooded Europe with those fleeing violence across the region.

In Israel, the memory of Iraqi Scud missile fire prompted the military to speed up a missile-defense program that included the development of its Iron Dome rocket-defense system with the help of the Americans. Then-Prime Minister Yitzhak Shamir, a hard-liner, held back from retaliating at the request of Bush, who feared losing Arab support for the war. Though American aid to Israel exceeds $3 billion a year, relations have been strained over stalled Palestinian peace talks.

Yet despite seeing his forces routed from Kuwait, Saddam clung to power and survived an uprising by both Shiites and Kurds following the war. The U.S. and its allies began to patrol a northern and southern no-fly zone to protect the Shiites and the Kurds while Saddam remained a thorn in the inside of American politics for more than a decade.

“I miscalculated,” Bush said in a December 1995 interview. “I thought he’d be gone.”

It would take President George W. Bush’s 2003 invasion to end Saddam’s reign, coming amid the U.S. campaign in Afghanistan. In its aftermath, al-Qaida in Iraq would arise and be put down by a U.S. military surge, coupled with the support of Sunni tribesmen. But as the U.S. withdrew from Iraq and Baghdad stopped supporting the Sunni tribesmen, the Islamic State group emerged from the ashes of al-Qaida in Iraq and in 2014, took control of about a third of both Iraq and neighboring Syria.

Today, the U.S. finds itself mired in a long war feared by Schwarzkopf and others who oversaw Operation Desert Storm. Oil prices, which sparked Saddam’s invasion of Kuwait, have dropped to under $30 a barrel from more than $100 in just a year and a half.

The cause, in part, is the same OPEC overproduction the late dictator Saddam railed against across the splintered Middle East.